You are at:Home»Current in Fishers»Student Profile: Akshay Athawale

Current in Fishers is highlighting Hamilton Southeastern School District graduates. To submit someone for this feature, email ideas to Editor Anna Skinner at anna@youarecurrent.com. 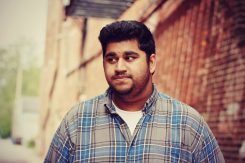 Akshay Athawale graduated from Fishers High School in 2013. He is completing his last semester at Indiana University where he is studying music industry.

Q: Where are you from?

A: I am from Pune, India. I was born there, but we moved to California when I was 6 months old. We moved back to India later, so I lived there from first to fifth grade.

A: Growing up in India was really good for me because I respect and understand my culture more. I have a better understanding of inclusiveness and how it relates to the diversity of people. I have a different perspective of the country than most people who have just grown up in the U.S. do.

Q: What brought your family to Indiana?

A: My mom got a job in Indianapolis and the cost of living and the schools were better than California, so we moved here.

Q: Did you have a favorite subject or class while you were at Fishers High School?

A: My favorite subject was probably choir, even though I only did it for one year. I really like music, and I didn’t really realize that I like singing that much until I did it.

Q: Do you remember your most influential high school class or teacher?

A: Probably that one once again just because (Mr. Johnson) was so incredibly into music, and he kind of influenced me to be really passionate about music.

Q: Where do you want to go with your major? What’s your dream job?

A: My dream job is to be a professional musician, so to actually be a recording artist and perform live. As a degree, it’s good to have background knowledge of the industry and the business side of it just so as an artist, when you’re signing a deal or signing with a management company, you know the ropes.

Q: When did you get into music?

A: I got into music really young. When I was 5 years old, one of my kindergarten friends had a toy piano, and I would just bang on the piano. I was obsessed with it. So I got piano lessons, and I’ve been playing ever since, and it’s been amazing.

A: After graduation, me and a couple of friends who are in this band Postcard are going to move to Nashville, Tenn., to try it out for real and just going to see how it goes from there. The biggest goal as a band is to be able to make this whole music thing a real job instead of just a side thing. Being a professional musician would mean being able to support myself solely off doing music and nothing else. Anything after that is a bonus. If you’re going to do anything, why not aim to be the biggest band in the world.

Q: Is there anything you want to tell younger people about high school or college that might benefit them?

A:  I would tell anyone who is going into high school to just relax. Whatever you think is a really big deal right now, I promise it is not a big deal at all.