You are at:Home»Current in Geist»Few in the field: McCordsville Brewer Eilise Lane talks on brewing in a male-dominated profession at Scarlet Lane 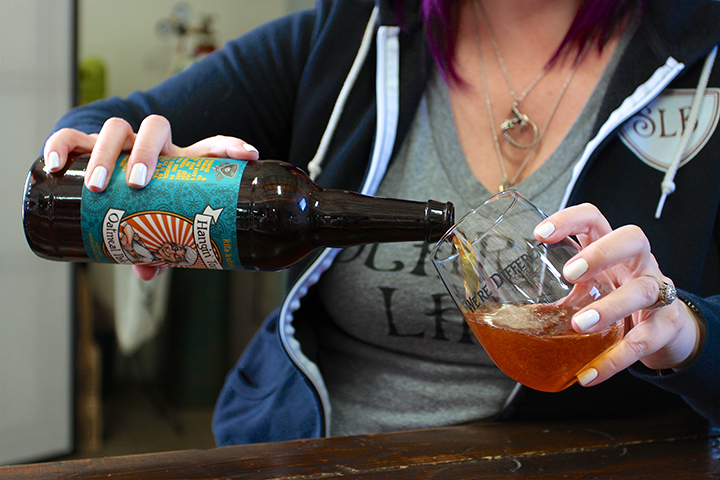 Eilise Lane celebrates women’s history in brewing and the third anniversary of her brewery, Scarlet Lane, in McCordsville. (Photo by Sadie Hunter)

Eilise Lane said nearly a decade has passed since her interest in craft beer was piqued.

Now, about five years after she said she went “full-time beer,” Lane runs a successful brewery in McCordsville: Scarlet Lane.

“I always enjoyed craft beer,” she said. “I moved out to Oregon and lived there for seven years. So I really started appreciating craft beer there. It’s kind of a Mecca.  At the time, I had a corporate job, but I kept an interest in brewing. We traveled all over the West Coast drinking and kind of refining our palete.”

In a vastly different career path, Lane worked in insurance as a program manager implementing IT projects to trim workforce.

“So, I’d fly to like Oklahoma, work in an office to determine what they do, implement an IT resource and eventually have to fire all of those people,” Lane said. “It didn’t make me a happy person. Eventually, I started home-brewing and kept getting more and more into it.

“My parents and husband saw that I had happiness and joy again, but only when I was around beer. So, they convinced me to quit my job and go back to school for fermentation sciences.”

From there, Lane said her goal was to bring a little bit of Oregon’s craft beer scene to Indiana. But in a profession where men are typically at the helm, Lane is eager to share the interesting history of the female role in brewing.

“Women were the original brewers,” she said. “(Men) were the hunters, and we were the gatherers. So, it was believed that (women) had a way to tell what was going to be poisonous, and we would be making the beer since water and sanitation was a huge problem. It wasn’t until the Industrial Revolution that men took over brewing because they made it into machinery.

“Beer has been made since the beginning of time. It started out truly in clay pots. You can find it in Egyptian history and so many other regions. It’s so interesting. There are ancient rulebooks that say men can’t touch it because the evil spirits would get into the beer.”

In today’s world, the craft is more male-dominated.

“One of the most common things is, people do not or would not recognize me as the brewer,” Lane said. “It can be a really hard, physical job. There are differences in men and women. You know, the guys will throw a 55-pound bag of grain on their shoulder, but I use my hips. It’s just adjusting to the differences, just working smarter.”

Scarlet Lane brews can be purchased at the brewery at 7724 Depot St., McCordsville, in many Big Red Liquors and Kroger stores, as well as various Target and Marsh locations in the area. 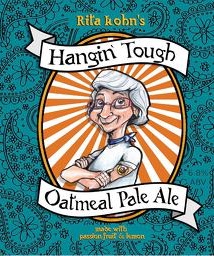 “Rita has been a huge inspiration to all of us,” Scarlet Lane brewer and owner Eilise Lane said. “She has been writing about beer for as long as anyone in Indiana can remember, and she’s actually been at NUVO longer than anyone that currently works there has been.” 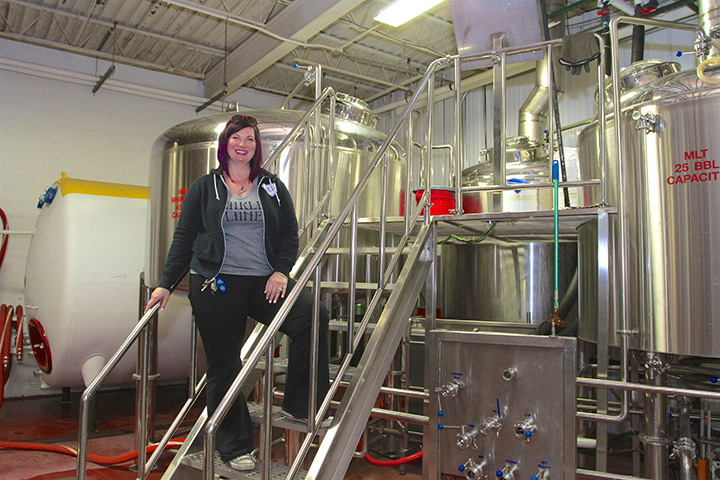 Career: Became interested in brewing nearly a decade ago. Opened Scarlet Lane in May 2014. She said she went “full-time beer” approximately five years ago after leaving her corporate job in insurance.

Education: Graduated from Butler University in 2003 and from the American Brewer’s Guild in Vermont, where she studied fermentation sciences and graduated in 2011.

Personal: Married to husband, Nick. They have three dogs. The brewery is named after their dog, Scarlet, who has since died.

What: Scarlet Lane will celebrate its third anniversary this month at the brewery and tap room. The event will also serve as a “Halfway to Halloween” party, where it will launch a new speciality IPA, to be revealed soon. The event, open to the public, also will serve as the day the brewery relaunches its Dorian Coconut Stout.