You are at:Home»Current in Carmel»Carmel Community»Donatello’s to host cheetah fundraiser

Donatello’s Italian Restaurant in the Carmel Arts & District is hosting a wine dinner on April 27 to benefit the Cheetah Conservation Fund of Indiana, a newly formed statewide chapter to help protect and conserve this threatened African cat. 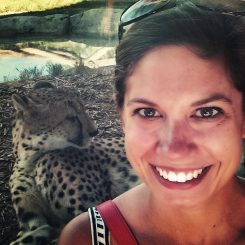 Nicole Phillips stands in front of a cheetah on exhibit. The Cheetah Conservation Fund of Indiana will benefit from the fundraising dinner at Donatello’s on April 27. (Submitted photo)

Tickets for the event cost $95 per person and include tax, tip and a donation to the group. The event starts at 6:15 p.m. and includes six dishes paired with six wines. Chef Patrick Aasen will prepare specialties such as sautéed calamari, scallops and shrimp, a linguini with braised rib eye, crumbles of gorgonzola cheese and a light sauce, and chicken francese, which has a sauce of lemon, butter and capers.

Nicole Phillips, a CPA who lives in Carmel and graduated from Carmel High School, volunteers with the cheetahs at the Indianapolis Zoo in her spare time.

“Everyone knows that cheetahs are the fastest land mammals, but not everyone knows their populations are rapidly declining,” Phillips said. “They’re beautiful creatures with great personalities and it’s heartbreaking to know that their numbers are dwindling. I wanted to get involved, even though I live in Indiana.”

Her love of these animals inspired her to become one of the founding members and treasurer of the Indiana chapter, along with teacher Ann Burke, of Bloomington, who serves as president, and zoo educator and artist Kristen Latzke, of Indianapolis, who serves as secretary. The group, which is less than a year old, has two goals: spread awareness about the cheetah’s fight against extinction and to raise money for the Cheetah Conservation Fund’s international organization. The CCF is the world’s leading organization dedicated to saving the cheetah in the wild. All of its programs are rooted in scientific research and it addresses the threats both to the cheetah and its entire ecosystem, including human populations.

Tickets can be purchased over the phone at 317-564-4790 or online at donatelloswinedinner.eventbrite.com.

For more, visit indianacheetah.org and to get involved with the Indiana chapter visit their page on Facebook.