You are at:Home»Current in Fishers»Beck’s Hybrids president talks leadership, faith at HCLA event

Attitudes, action and faith are important to Scott Beck, president of Beck’s Hybrids. 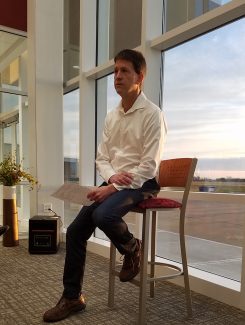 “Attitude and work ethic play an important role in what we do and how we get along,” Beck said at the March 23 Hamilton County Leadership Academy’s community storyteller event at Beck’s hangar at the Indianapolis Executive Airport in Zionsville.

Beck’s Hybrids was created in 1937 when Lawrence Beck and his son, Francis, planted a three-acre portion of hybrid parent seed corn on their farm in Hamilton County. Eighty years later, it is the largest family-owned seed company in the U.S., serving farmers in nine states.

Scott Beck became president in March of 2015 after his father decided it was time to pass the torch. Although they are family, Scott admits they have different leadership styles. He leans more toward the inspirational approach and is driven by responsibility, while his father liked to be in charge.

However, they do agree on the company’s culture. About eight years ago they collaborated with a group of employees to pinpoint who they were as a business. This led to Attitudes and Actions, which includes teamwork, integrity, innovation, adaptability, commitment and passion.

“Those weren’t things that were aspirational goals,” Scott Beck said. “Those were things that really described who we were as people in our business.”

They created a recognition program as well, where employees can acknowledge coworkers for their actions through an online system to foster that culture.

Scott Beck also is very passionate about his faith. He went to church when he was young but really developed a relationship with God near the end of college.

“I went through a funnel to get to that point, and then it opened back up my vision to the opportunities and potential (God) has to offer,” Scott Beck said.