You are at:Home»Current in Carmel»Carmel Business Local»Marriott North completes $15M renovation of guest rooms, other areas 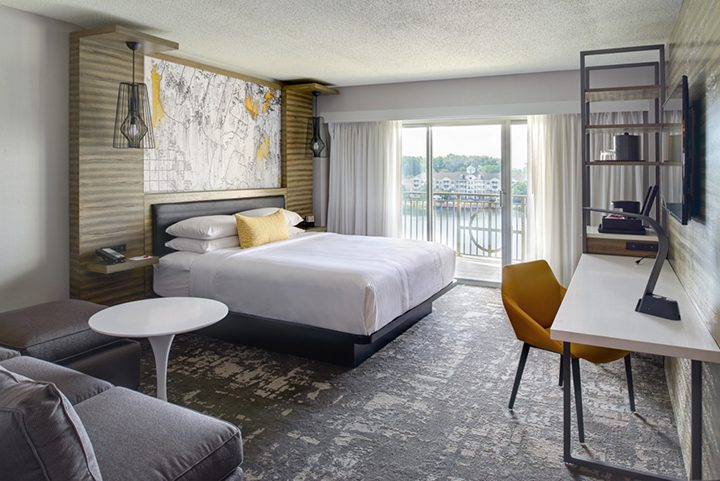 Marriott North has redesigned all of its guest rooms. (Submitted photo)

“It was a complete top to bottom renovation,” Marriott North General Manager James Jackson said. “It’s the most extensive remodeling to date.”

The recently completed renovation for the Keystone at the Crossing hotel, which opened in 1998, cost more than $15 million.

“It was taken all the way down to concrete and put back together,” Jackson said. “They were very creative. They really reworked the space so the king rooms were all able to have a sofa or sleeper, some place where you could sit there and relax and watch TV.”

“A lot of what they designed was not just the racing but a feeling of movement,” Jackson said. “It’s what they call an urban adventure. There is an area they call The Library, where there is really comfortable seating and you can have cocktails. It’s all surrounded by different art pieces of all different styles.”

In addition, there also are LCD TV screens.

The Library is adjacent to a glass-paneled solarium, showcasing the lake views.

“That took over the space that was the terrace,” Jackson said. “They are building a new terrace now.”

Jackson said the hotel never closed during the renovations. Some hotel floors were closed at a time while the guest rooms were being remodeled.

“It was a very welcome change, not just in style but in expansion with the use of space and the technology,” Jackson said. “People love that.”

Jackson said there are USB ports and an enhanced Wi-Fi system.

There is a roomy redesigned fitness center as well.