You are at:Home»Current in Fishers»Fishers Community»Fishers Mayor Scott Fadness talks economic development, growth at State of the City 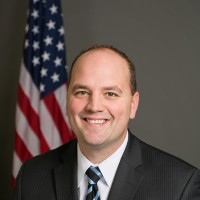 “Our economic development has involved over 1,500 new jobs in 2016 in the city and $200 million of private real estate investment,” he said. “There have been over 53,000 police calls and 5,000 fire calls, and 74 people have been helped through the community paramedicine program. We have had all of this activity while still maintaining the lowest tax rate in any city in Indiana. There’s been an extraordinary amount of activity and energy around this vision of becoming a smart and vibrant entrepreneurial city.”

Fadness was questioned by an Indianapolis reporter. The first question was about the city’s largest challenges and how the administration will address them.

“One of the biggest challenges facing our city, believe it or not, is sustainability,” Fadness said. “People come here to be near where they work and our good schools and they can find affordable housing, but they don’t really have a tie to the community. So when Fishers is no longer the shiny object it once was, how does Fishers continue to sustain itself? Those types of challenges are not here today but will be here.”

Fadness said he and his staff are addressing that by reinvesting parts of the community that are beginning to see urban decay, such as 96th and 116th streets and Allisonville Road.

Fadness also was asked what he would say to those in the community concerned about the quality of life when IKEA opens in the fall.

“I went through the same emotion they did,” Fadness said. “We will make sure it fits the vision of the community and take proactive steps to rezone the area around it to not get the traditional retail that follows IKEA’s.”

Fadness also addressed traffic concerns and highlighted what has been done, and what will be done, to ensure connectivity throughout the city.

“Last year, we put $30 million of road infrastructure into this city, typically around IKEA and Topgolf at the 116th interchange,” he said. “We will invest $200 million over the next five years, including (Ind.) 37. That in itself is not good enough. I think the best thing to do from a traffic perspective is bring more jobs back to Fishers so people are actually working and living in Fishers.”

Fadness concluded by stressing the importance of Indianapolis and Hamilton County cities working together.

“In the past, I don’t know if it (Fishers’ relationship with Indianapolis) was great, but I think it’s getting a lot better,” he said. “We are still trying to figure out what our roles are with one another. I do think none of us will be better off individually as we could be collectively. We as a metropolitan area are not succeeding at nearly the rate we need to be. Fishers and Carmel talk about success individually, but collectively, as a whole region, we have a lot of work to do, and we need to be leaders in that pursuit. Fishers should be engaged as much as possible with that discussion.”