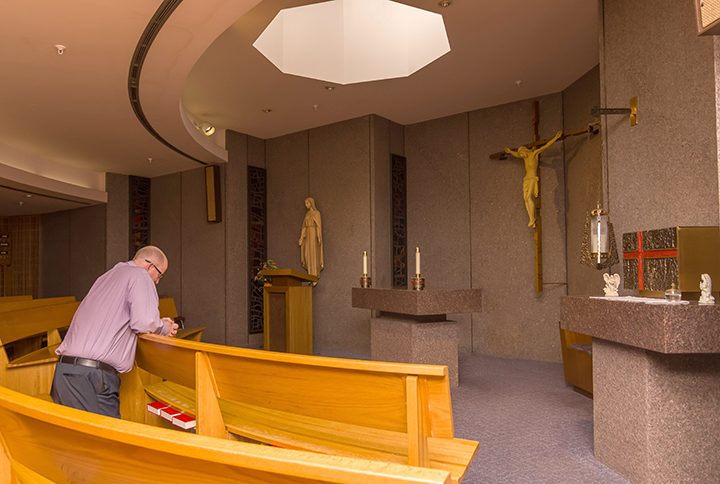 Wally Veazie prays in the chapel at St.Vincent, where he felt inspiration that led him to bring “The Cross and the Light” musical to Carmel. (Submitted photo)

For Wally Veazie, the power of prayer proved to be a miraculous force in his life.

“Pam fell and hit the dresser with her chin, and the rattling of the drawer handle woke me up, which is amazing to me because I’m a pretty solid sleeper,” Veazie said.

Paramedics weren’t sure what the cause was, wondering aloud if it was a bad drug interaction. Pam struggled to tell them she hadn’t taken anything.

“I thought I could talk, but I couldn’t,” Pam said.

The paramedics suggested she be taken to St.Vincent Hospital in Indianapolis, even though it wasn’t the closest hospital to their Carmel home.

Although Veazie didn’t know it initially, Pam was given last rites that morning. That set off a chain of events that spurred Veazie to bring the spiritual musical “The Cross and the Light” to Carmel High School this month.

That journey began with Veazie spending hours in the hospital chapel as Pam clung to life.

“Over 60 percent of the patients would not have made it,” Natarajan said. “So I feel like God was looking out for her with prayers and physicians and nurses’ help from here. I don’t think any of us can do what we do by ourselves. It’s remarkable how she is doing now.” 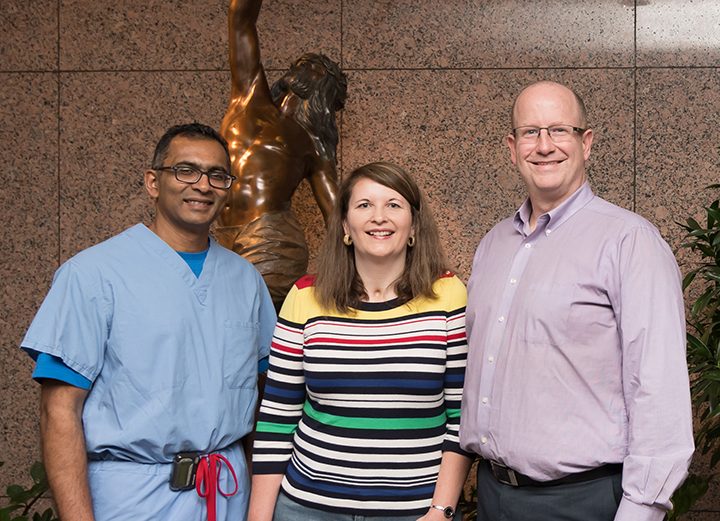 From right, Wally and Pam Veazie and Dr. Kannan Natarajan pause at St.Vincent, where Wally sensed a calling from God as he prayed for Pam as she fought for her life. Wally arranged for “The Cross and the Light” musical to come to Carmel March 10 to 12. (Submitted photo)

‘I just felt a presence’

Pam is a life-long Catholic. Her husband converted in 1999 when they started a family. They went to church each week, but that was the extent.

There were two hospital episodes that strengthened his faith.

“When she was getting surgery to get a tracheotomy after a week-and-a-half, they had to take her off medications, like the blood thinner, which raised risks,” Veazie said. “That brought a rush of anxiety and pain to me. I was in a small waiting room, outside the surgery area, curdled up in a fetal position, hardly able to breathe and sobbing uncontrollably. After five minutes, I felt (something) like arms wrapping around me. Was it an angel or Mary, mother of Jesus? I don’t know for sure. It felt like a motherly embrace. My heart rate immediately went to normal. My breathing went to normal. It just felt like it’s going to be OK. I didn’t see a vision. I just felt a presence. It’s something I never felt before or since.”

The second event was when Pam needed to have enriched oxygen removed.

“You can’t stay on it forever, because you get oxygen toxicity,” Veazie said. “There were two attempts to take her off, but each time her blood oxygen would go down quickly and they had to put her back on.”

So Veazie asked what would happen if the third attempt failed, and doctors said they would manage her through organ failures. Veazie asked a priest to be in the room when they took her off the oxygen.

“They took her off, and the numbers started going south like it had the two previous times,” Veazie said. “The difference is the priest put his hand on Pam’s forehead and his other hand on my shoulder and continued to pray. At that exact moment, the numbers turned. Her blood stabilized. The descent stopped and started curving up. That was a moment of true grace. From there, she continued to get better every day. From there we thought about recovery and rehabilitation and not so much life and death.” 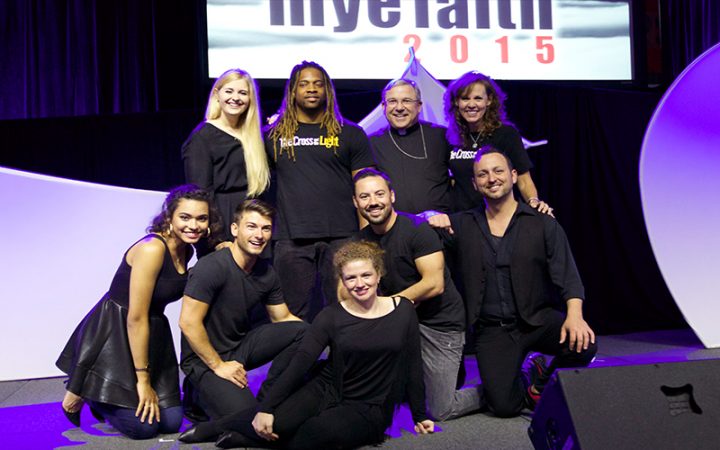 The cast of “The Cross and the Light.”

For the Veazie family, Pam’s ability to walk and talk is a miracle.

“You try not to think that you are negotiating with God, saying if you do this for me, I’ll do this for you,” Veazie said.

Veazie experienced a revelation while praying at the foot of the chapel cross. He felt God was calling him to reach out.

“I think God has a sense of humor. He wants me to be at my maximum level of discomfort, because evangelizing is the most difficult thing for me as an introverted engineer,” Veazie said.

Listening to a Catholic radio show in September 2015, Veazie heard Kelly Nieto interviewed about a musical she created.

Nieto, a 1987 Miss America runner-up, wrote a musical on Christ’s crucifixion through Pentecost.

“I went home and watched the videos, and it made me emotional,” Veazie said. “I thought this is beautiful. I learned it’s a group that comes to local arenas.”

Veazie realized this might be his path to fulfill his promise to God. Veazie, Pam and their three children, ages 14 to 18, saw the show in the Detroit area in March 2016. He was sold and became determined to bring the show to Carmel. Twelve Catholic parishes in the Carmel Deanery of the Lafayette Diocese, including the Veazie family’s parish, Our Lady of Mt. Carmel, have been selling tickets.

Nieto started a small version of the musical in 2002. The first professional production was in Detroit in 2011. It has gone from a large cast to seven cast members and returned to primarily playing churches.

“I spent 35 years wanting nothing to do with God,” Nieto said. “I was an agnostic, New Ager until I had a very intense conversion experience when I heard my mother was going to die. I pretty much bartered for her life. I said I don’t know who you are or what you are, but I’ll give you the rest of my life to keep her alive and show me the truth.”

“I prayed the Stations of the Cross, and during the second station I experienced horrific spiritual pain. When I looked at the altar, I saw the cross and the light for the whole world to see, and I heard God say, ‘This is why you are here,’” Nieto said. “So I spent the last 17 years of my life building and creating from the ground floor up this epic evangelization and intentional encounter experience with Jesus so that millions of people around the world will come to understand Jesus’ love and mercy like I did in the stations of the cross.”

The Cross and the Light