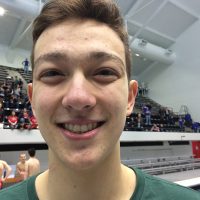 “I didn’t want to go in with any expectations,” he said. “I knew there were a lot of great swimmers among our senior class that could have gotten it. Winning it was definitely cool. It definitely came as a shock to me.”

Harmon, who will swim at Yale University next season, helped the Eagles to a second-place finish in the state finals Feb. 25 at the IU Natatorium at IUPUI. Carmel won with 359 points, 130 more than Zionsville. Harmon, senior Brock Brown and juniors Andrew Schuler and Jack Franzman captured the 200-yard medley relay in a state-record time of 1:29.44. Harmon finished second in the 100 butterfly, third in the 200 freestyle and was on the second-place 400 freestyle relay team. 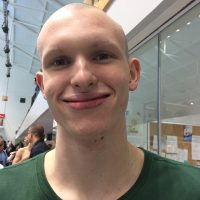 The mental attitude award, selected by the IHSAA Executive Committee, is based on academics, leadership and athletic ability. Harmon helped coordinate activities for the NFLPlay 60 campaign. He was awarded a National Youth Service America award as founder of Splish Splash swim clinics. Harmon also is a member of the National Chinese Honor Society and Best Buddies.

“When I was putting together the application, I thought I don’t know how anyone can beat this one,” Zionsville coach Scott Kubly said. “Doing it I learned a lot about him I didn’t even know. He definitely was very deserving.”

Franzman captured the 50-yard freestyle in 20.0 seconds, a bit below his state record time of 19.85 in Friday’s prelims.

“I was hoping to sweep my events, and it didn’t happen that way,” Franzman said. 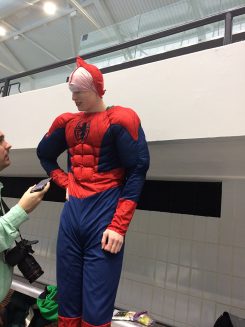 Carmel’s Drew Kibler topped Franzman in the 100 freestyle with a state record-time of 43.20 seconds. Franzman was second in 44.13.

Franzman is a Spiderman fan and dressed the part when he came out for his 50 free race.

For Franzman, it must have seemed like the Eagles needed some super heroes to beat Carmel.

“The depth they have is monstrous. It’s terrifying,” Franzman said. “It’s like going against an army.”

Kubly said this Eagles squad was special in and out of the pool, too.

“We have great leadership,” he said. “The seniors are the glue. They held us all together. I’m really proud of what they accomplished over this year.”