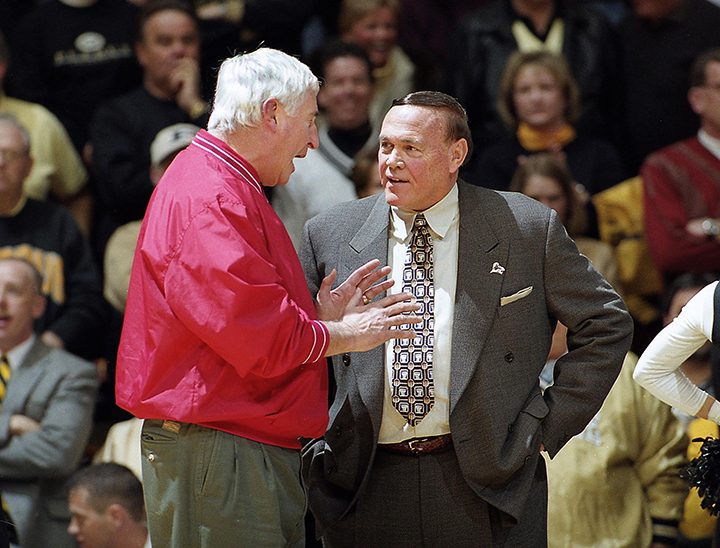 “We never were far apart,” Keady said. “Everyone thought we hated each other. We didn’t. I always respected him.”

Keady, 80, and Knight, 76, will appear at 8 p.m. March 31 at the Palladium in Carmel. Bob Hammel, Knight’s long-time friend and former Bloomington Herald-Times sports editor, will serve as the moderator. The event will be held the day before the Final Four starts so Keady said he figures there will be some March Madness talk.

“We freelance, whatever comes to your brain,” Keady said. “It could be rough. No, I don’t think so. I’ll try to show some class.”

There no doubt will be stories from the IU-Purdue rivalry.

“We really don’t discuss what we’re going to talk about,” Keady said.

Keady held a 21-20 edge over IU when Knight was coach. Purdue later had to forfeit one of those victories when Luther Clay was declared ineligible. Clay played one minute in Purdue’s 1996 victory.

Keady and Knight appeared at the Purdue Ag Alumni Fish Fry in February 2016.

“Then we helped (President Donald) Trump with the campaign,” Keady said. “I hope we helped him. Hope we didn’t hurt him, I don’t think we did.”

Keady appeared with Trump at the Palladium prior to the Indiana primary in May 2016.

Keady said he typically is in contact with Knight once a month.

“I just enjoy talking to him,” Keady said. “He did the things I thought you should do. You graduate your kids. You played hard and you taught your kids how to win. Those are things I’ve admired in any coach.”

Keady said he believes their senses of humor mesh.

“I enjoy his. I don’t know if he thinks I’m funny or not,” Keady said.

Tickets range from $35 to $110. For more, visit thecenterpresents.org.