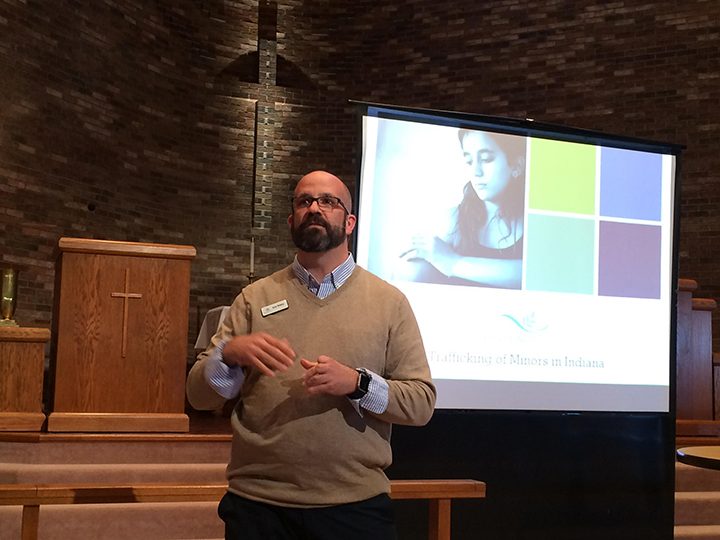 Blakley said human trafficking, where victims are sold for sex or used in child pornography, is the second-fasting growing criminal enterprise in the world.

“We look to serve the teen survivors of trafficking,” said Blakley, a Westfield resident who is a vice president and branch manager with PNC bank. “We do two main things, advocacy, which is my main area of things. I do a lot of speaking engagements. I speak to a lot of small groups, community training, we talk to teachers, social workers, court officers, police officers. If you work around a child and if you are aware what to look for, there are things you can do to be helpful.”

Blakley said parents, grandparents or other relatives can learn what to look for as far as children’s online activity.

The other thing Ascent 121 specializes in is recovery. Ascent 121 works with IMPACT, an Indianapolis residential treatment. Blakley said the teens go there for shelter after they’ve been rescued from the situation.

The name of the group comes from Psalm 121.

The majority of trafficked teens have experienced prior sexual abuse, physical abuse or neglect.

According to figures by Ascent 121, Indiana has the second-highest rate of rape/sexual assault of teen girls in the nation.

One-third of female runaways are approached or recruited into the sex trade within 48 hours of leaving home.

Blakley explained it isn’t only runaways that are abducted and sold for sex. Often it’s an older male attempting to present himself as a boyfriend, who forces a child into the sex trade.

“They’ve not only been exposed to evil by this abusive relationship, but all of the people who have come into their world abused them again and again,” Blakley said.

Drugs are often used to control the victims.

“A lot of the problem is some of these girls don’t understand what love looks like,” Blakley said.