You are at:Home»Current in Zionsville»Harpist to visit Hussey-Mayfield March 14

Harpist and composer Jan Aldridge Clark will be performing an Irish Harp Concert at the Hussey-Mayfield Memorial Library at 7 p.m., March 14. 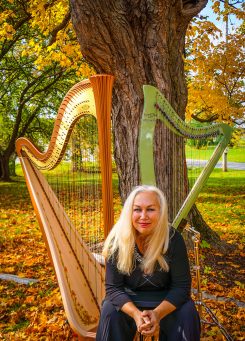 Jan Aldridge Clark will play traditional Irish tunes and singing in Gaelic when she visit Zionsville next week. (Submitted photo)

The concert comes just before Saint Patrick’s Day. Aldridge Clark will play traditional Irish tunes and singing in Gaelic on some songs, as well as taking the crowd on a musical journey that includes blues, Latin music, and classic rock. Percussionist Michael Beck will join her in concert.

“I’m going to be doing some really famous, traditional Irish music. The Irish music will be played on a small electric harp. It has a different sound,” Aldridge Clark said. “It is not just dance music, but it’s also music of war. For many many years Ireland was at war with England.”

Beck and Aldridge Clark play their unique repertoire at several libraries around the state. Aldridge Clark says they plan to play songs by Ozzy Osborne, Nirvana and Metallica.

“It’s a popular show because we’re playing the kind of music you wouldn’t normally play on the harp,” Aldridge Clark said. “[Beck] brings in some unusual percussion instruments like a cajon drum, congas, shakers and timbales.”

The event will be held in the Lora Hussey Room, the main conference room at Hussey-Mayfield.

“It’s a great place to have a concert. Sound carries well in there,” said Orton Ortwein, the Adult Programming Coordinator at Hussey-Mayfield Memorial Library.

Ortwein said that Aldridge Clark came highly recommended from other promoters in Zionsville. Aldridge Clark was classically trained at the Jacobs School of Music in Bloomington and continued her Masters Studies at California State University Los Angeles, pursuing Jazz studies. She has recorded multiple albums and performed at private parties and weddings of such high profile clients as Sylvester Stallone, Tony Danza, Barbara Walters, John Mellencamp, and Henry Kissinger.

“We’ve never had a harpist here before,” Ortwein said. “We do about four concerts a year at the library, and we always try to do something a little different. We also try to celebrate other cultures.”

Aldridge Clark will be available after the concert for a Q&A, and will have CDs for sale. Attendees must be over the age of 10 to attend, and registration is required.