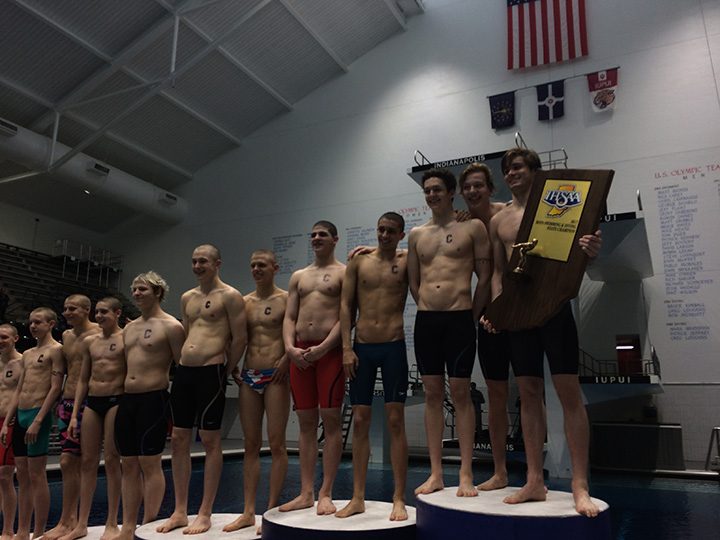 Carmel High School boys swimming coach Chris Plumb has been involved in his share of some tense state finals.

His team won the state title by one-and-a-half points over Bloomington South in 2012 and one point over Zionsville in 2016.

“We’ve been coming here a long time with the boys where every race counted and we were hanging on to every swim,” Plumb said.  “To have a team this deep and this experienced was a great accomplishment for this program.

The Greyhounds captured their third consecutive state championship and sixth in eight years in dominating fashion, topping second-place Zionsville 359 to 229 Feb. 25 at the IU Natatorium at IUPUI. It was the 17th boys state title for Carmel, the sixth under Plumb.

The 359 points were the second most in the boys swimming state finals history. The state record is 369, set by the Greyhounds in 2003. 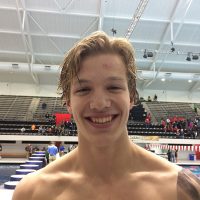 “The depth they have is monstrous, it’s terrifying,” Zionsville swimmer Jack Franzman said. “It’s like going against an Army.”

“We’ve worked so hard all season, and it’s great to see the hard work pay off,” Kibler said. “The team atmosphere we have makes it so much easier to work hard day in and day out.”

Kibler wasn’t entirely happy with his times in the finals.

“I set high goals for myself, which leads me to be disappointed,” Kibler said. “All in all, I’d say it was a success.”

“We thought Wyatt could do it, but to double up with the 500 free and 100 back was a great swim for him,” Plumb said. “The other surprise was having so many through to the finals with three in 50 free and three in the 100 breaststroke.”