The Carmel Clay Historical Society is digging up stories from Carmel’s past by hosting monthly newspaper indexing sessions at the Monon Depot Museum. 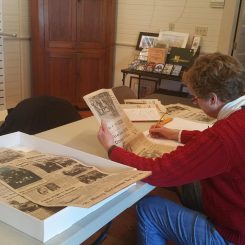 “Indexing the newspaper is a great way to learn about Carmel’s history and growth,” CCHS historian Katherine Dill said. “If someone’s been here for a while, they will be sure to read about events they lived through and people they know. It can be a nostalgic experience.”

Recently indexed headlines include “Carmel, Westfield continue to argue,” and “Settlers Drawn by Hamilton’s Riches.” Other stories covered the induction of Flowing Well Park and bicycle paths and the blizzard of ’78 from the Carmel Topics and The Carmel Daily Ledger.

CCHS is indexing the newspaper to make the articles more accessible. Dill said the papers will not be digitized because of complications with copyright and costs. She said even if CCHS does get permission to digitize the papers, it would still need to find an organization with a large scanner, and that the process would be costly.

“But frankly, it also saves the paper,” Terpening said. “Having been a museum director, I understand the need.”

The indexed newspaper will be available at the Indiana State Library on microfilm and can be viewed for free via the Carmel Clay Public Library’s interlibrary loan.

The community is encouraged to donate newspapers for indexing to CCPL and can contact the CCHS prior to donating to ensure copies do not already exist.