You are at:Home»Current in Westfield»Lack of public transportation leads to lack of employees in the restaurant industry

Westfield’s growth has resulted in a commercial and restaurant industry boom, but Westfield resident and Which Wich Operations Partner Todd Williams said that brings with it its own staffing problems. Williams owns the Carmel, IUPUI, Fishers and Keystone at the Crossing Which Wiches, and he wants to bring one to Westfield as part of the Trails Planned Unit Development. 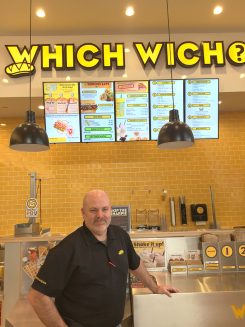 Which Wich Operations Partner Todd Williams said that a need for restaurant employees originates from a lack of public transportation. (Submitted photo)

Williams said that while driving on Ind. 32 in Westfield, he saw nine businesses with “Now Hiring” signs.

“When you look at that, they’re all restaurants that don’t employ servers. This is an employee base  that’s getting paid 8, 10, maybe $12 dollars an hour, and at that rate, it becomes much more difficult for a business model to hire somebody in that price range,” Williams said. “You, as a guest or customer, have an expectation to go through a drive-thru and get in and out relatively quickly, but if you don’t have the staff to take care of that, you get upset as a guest. What do people in Westfield really want? We all talk about it. We want great restaurants, and all these other things specifically with regards to restaurants. You can see it building, but our demographic can’t handle it.”

Williams said he understands the fear of Section 8 Housing or other options to allow for that demographic to come to Hamilton County, but that he believes something must be done. Other public transportation options, such as Uber or Lyft, might not be viable for employees on limited wages.

“I’m one of those guys looking to come here, and my biggest worry is labor,” Williams said. “I know the revenues here, so the reality is my answer to that (fear of government housing) is it’s part of our growth. It just is. If we want the things we want, how are we going to staff that? Where are they going to come from?”