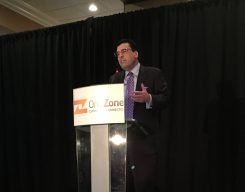 “Your airport is doing very well, and it is your airport,” Rodriguez said. “We all work for you. You are the stakeholders of this airport. We have one international airport and three additional reliever airports. One of the airports (Indianapolis Metropolitan Airport) we’re working hand in hand with (county commissioner) Steve Dillinger and Mayor (Scott) Fadness to put back into productive use.”

“The City of Fishers is developing the usage of the Fishers airport land, which puts money back on tax rolls and also gets us back to doing our core competency, which is running airports,” Rodriguez said.

Before taking questions and comments, Rodriguez showed a video that focused mostly on Indianapolis International Airport updates, including water bottle filling stations which keep 160,000 plastic water bottles out of the trash each year;  the option of 20 BlueIndy electric cars; electric buses; exploration of paths for a more energy friendly airport; interactive experiences at the airport for state events such as the 100th running of the Indy 500; and two aviation-themed child play areas to prevent fear in children of flying and more.

“Part of what we’re trying to do is have a better facility for the community, for travelers, for business partners and also have a larger economic impact in the area,” Rodriguez said in the video.

Overall, IAA’s total revenue was up $10 million in 2016. For more, visit indianapolisairport.com.