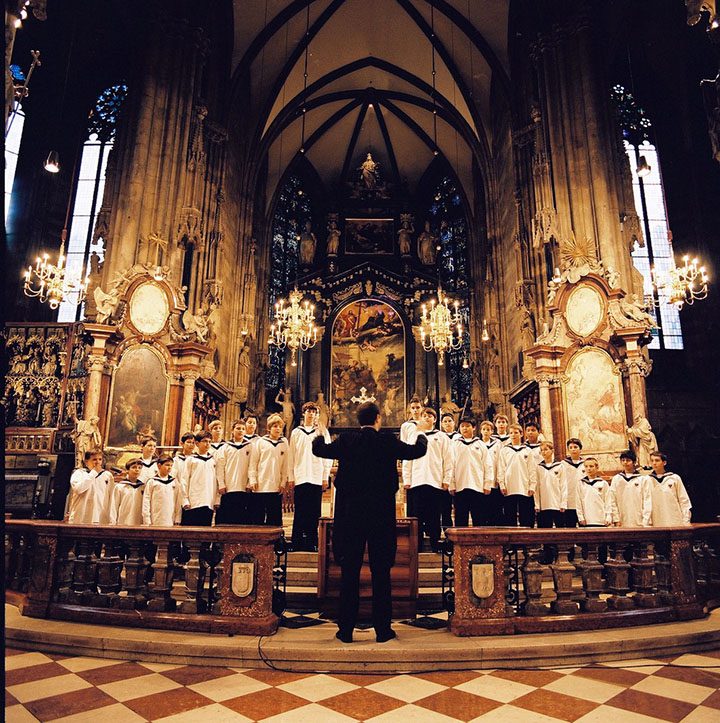 The Vienna Boys Choir performs traditional tunes inside a cathedral. The group will visit Carmel next month when it performs at 8 p.m., March 4 in Carmel. (Submitted photo courtesy of photographer Lukas Beck)

The Vienna Boys Choir is bringing its centuries-old tradition to Carmel.

The famous boys choir, formally established in 1498 by Holy Roman Emperor Maximilian I, will perform at 8 p.m. March 4 at the Palladium. The choir is in the midst of a 32-city North American tour, traveling by bus.

There are 22 sacred and secular songs in the program titled “Smile.”

“In the first part, it’s a classical repertoire,” conductor Oliver Stech said. “We have pieces by Mozart and Mendelssohn and German composers. The second part we will take the audience on a journey through the world with different continents. We have songs from Bulgaria, Germany, Mexico, Venezuela and South Africa. We also have some Austrian songs, including one the audience can sing with us.”

Stech said there will be some movie music, including “The Bare Necessities” from “The Jungle Book.”

“We’ll also have music by Johann Strauss II and his famous waltzes,” said Stech, who joined the choir in 2011. “It’s a very diverse program.”

The performance lasts about two hours.

“We’ve been received well so far by American audiences,” Stech said. “The program is titled ‘Smile” and they have a lot of things to smile about, especially in the second half of the program where they see the boys dancing. We have a few songs that are choreographed, which makes the show more fresh and funny.”

The Vienna Boys Choir is composed of four separate ensembles of 23 to 26 boys, all between the ages of 10 and 14. Each one has its own conductor.

Approximately 11 weeks of the school year are devoted to touring for each ensemble.