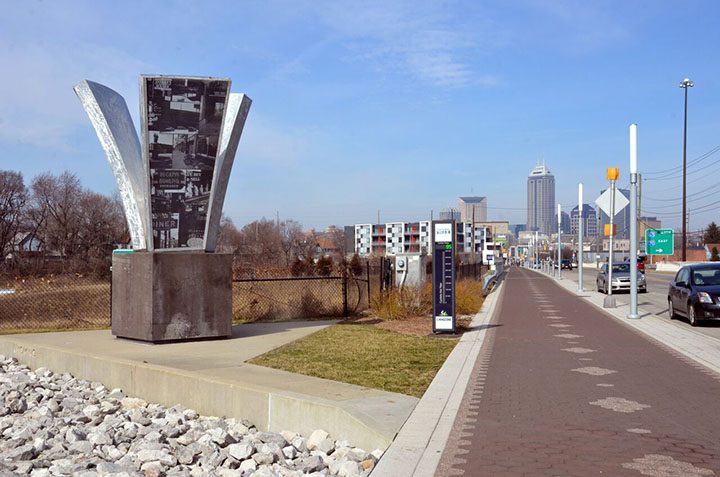 Witch Hazel is located right off of the Cultural Trail and I-70 in Indianapolis’ historic Fountain Square neighborhood.

In what used to be a popular donut shop on Virginia Avenue in Indy’s hip Fountain Square neighborhood, three hair stylists are hard at work stripping paint and installing light fixtures. Witch Hazel salon, the brainchild of 2007 Carmel High School graduate Mel Moss and two of her colleagues, Sarah Moscato-Goodpaster and Kelsey McColm, is scheduled to open March 1. 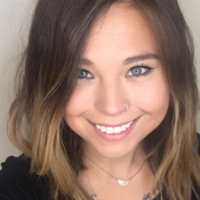 Moss has been a licensed cosmetologist for eight years, graduating from Aveda Frederic’s Institute Indianapolis in 2009. She worked in salons for more than five years, before opening her own space in Carmel’s Salon Lofts at Merchant Square. Salon Lofts allows beauty specialists to rent individual spaces, enabling the autonomy of using their own branding and products.

Moss, however, had loftier goals. Along with Moscato-Goodpaster and McColm, who were also renting individual spaces at Salon Lofts, she envisioned a larger space for her business.

Moss, Moscato-Goodpaster and McColm had individual relationships, but first spent time as a group in October 2013.

“We all met because we went to Aveda school and worked at Aveda salons. We knew each other through the Aveda world,” Moss said.

“The first time we hung out the three of us, we decided we would open a salon and call it Witch Hazel,” Moscato-Goodpaster added. “Witch Hazel is an Aveda hairspray, so that’s where the name comes from.” 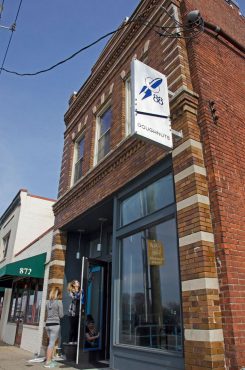 Formerly Rocket 88 Doughnuts, this 3,000-square-foot space is being remodeled to fit the needs and aesthetic of Witch Hazel salon.

The three stylists were all at their own Salon Loft spaces and paying individual rent, and thus made the decision that it would be more economical to band together and rent one large space.

“We didn’t seriously move on anything until Rocket 88 closed,” Moss said. “The day they announced their closing on social media was Sarah’s birthday.”

“It was almost three years to the day from when we first met as a group,” Moscato-Goodpaster said.

They said they knew they had to have the space. Immediately, they tried contacting the former owner of Rocket 88, as well as the landlord. Eventually, their commercial realtor John Corey of Levi Investment Realty got them in contact with the building’s new owner.

The lease for the two-story, 3,000-square-foot space was signed Jan. 20, and the bulk of the build out will be done in approximately three weeks.

“We hired painters, plumbers and electricians. Everything else we are doing ourselves,” Moss said.

The top floor will feature eight stations for the three owners and three to five additional booth rentals. The lower level will be home to the color-mixing station, but eventually they said they would like to add either a bridal suite or spa.

A grand-opening reception is set for March 12. All current clients will be transferred to the new location. The salon will carry Kevin Murphy and R+Co products. Kevin Murphy color will be provided, but stylists will have the freedom to use their own products as well. Hours and price lists will also be up to the individual stylists.

Witch Hazel features free street parking, and for those traveling to the downtown salon, it is right off of I-70 and very easily located.

“We have a good amount of clientele from the north side,” Moss said. “Our clients are excited, and so are we.”