You are at:Home»Current in Fishers»Humane Society of Hamilton County presents proposal to move to Fishers City Council 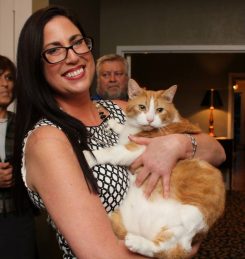 Executive Director Rebecca Stevens said the humane society has been out of space since it opened at its current Noblesville facility. (File photo)

It was only the organization’s first reading to the city council.

HSHC Executive Director Rebecca Stevens made a presentation, and she said that since the current location’s first opening in October 2006, the humane society was over occupied.

“We need a new facility for many reasons,” she said. “The initial assumption is we are wanting to house more animals, but the reality is it is about much more than that. We were out of space the day we moved into the current facility. That day we moved in I remember not having enough space for the cats in our care.”

Stevens said that 60 percent of the families in Hamilton County have at least one pet in their household. The proposal is to rezone two parcels of approximately 10 acres at 10501 Hague Road zoned agricultural to commercial to allow for the humane society. The site is near 106th Street.

No concerns were expressed from the council except for Councilwoman Cecilia Coble asking if there were signatures from neighbors near the site. Another question from the council was for the petitioner to discover what the cost of transporting the animals, if there was one, from the current location to the new site if approved.