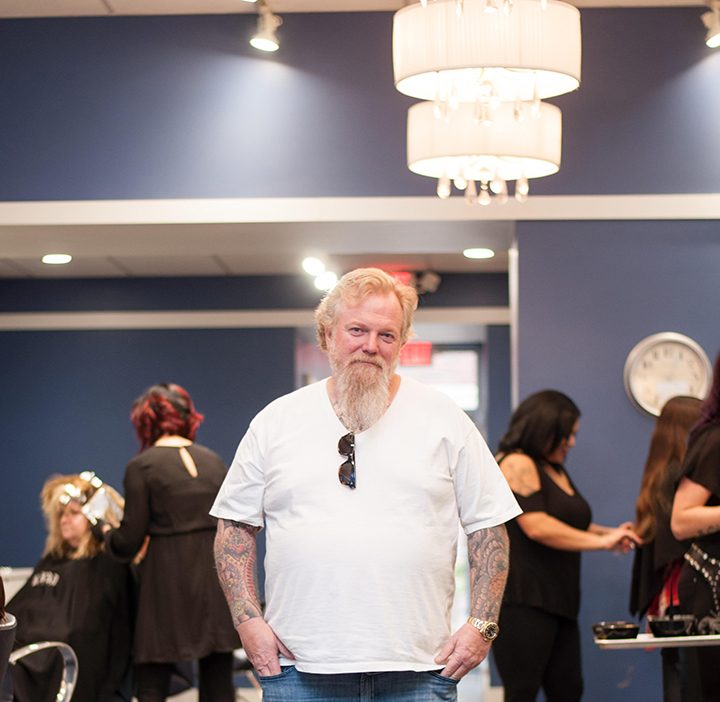 Mike “Cheez” Brown at the Fishers KKBB salon. Brown is co-founder and co-owner of Kiss Kiss Bang Salon along with his wife, Tanya Foster. (Submitted photo)

Kiss Kiss Bang Bang salons are a mash-up of punk rock and hair fashion. Founded in 2006, Kiss Kiss Bang Bang has locations in Fishers, Carmel and Fullerton, California. According to co-founder Mike “Cheez” Brown, KKBB Fishers is the top grossing and netting salon in the country per square foot. The Carmel location is in the top 10.

Brown grew up in Kokomo and said he didn’t learn to read until 10th grade. His mother died when he was 9 years old, and his father died seven years later.

At 16, Brown moved to Los Angeles to pursue music and immersed himself in the punk rock scene, making connections with a growing list of famous friends, including Steven Tyler of Aerosmith, Kid Rock, Madonna and members of Guns N’ Roses and Rage Against the Machine.

“My greatest asset in life has been my ability to form deep relationships that have turned into the breeding ground for great opportunity,” Brown said. “As a kid not being able to read, I had to figure out other ways.”

Slash of Guns N’ Roses, Gerard Way of My Chemical Romance and Big Time Rush are only a few of the celebrity clientele who have visited the Kiss Kiss Bang Bang Fishers location and made their mark on the wall of fame in the back of the blue-hued salon.

Brown manages the salons and bands in the same way, pushing an entrepreneurial spirit and banning gossip and negative talk.

“It’s a lifestyle and a philosophy and a way of life that we live by,” Brown said. “It’s about teaching people to do their best.”