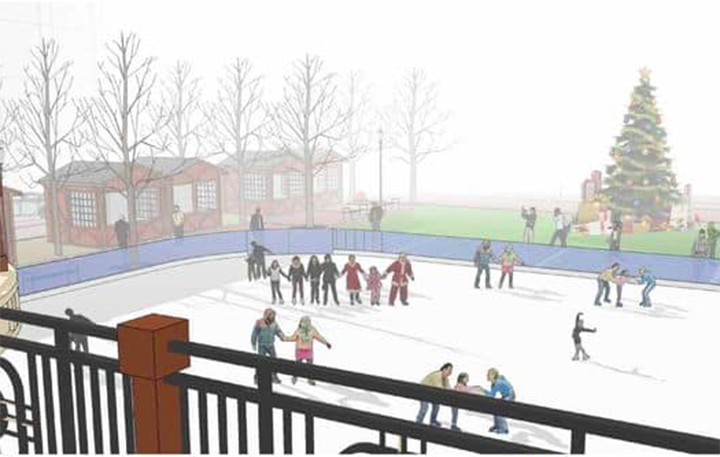 An outdoor ice skating rink is expected to be ready for use by next Christmas. (Submitted rendering)

Carmel Mayor Jim Brainard said plans for an outdoor ice skating rink and Christkindl market should be finalized by April, with work set to begin in the late summer or fall. He said he hopes to have it open next winter as the city relocates Holiday on the Square to this location.

The cost could be anywhere from $5 million to $8 million, depending on the scale of the project.

A board has been formed to oversee the Christkindl market, which will surround the rink with booths selling holiday crafts and winter treats.

The skating rink construction will be funded using a portion of the $257 million bond package the City Council approved in January 2016.

Brainard has already considered several versions of plans for the project, which is being designed by Indianapolis-based Rundell Ernstberger Associates. Renderings originally showed a bridge that let attendees overlook the skating rink and walk from The Palladium to the Booth Tarkington Theater, but Brainard scrapped that idea because it was too costly and because it would obstruct the view of The Palladium.

Brainard said the City has also decided to scale back the size of the rink. It’ll be about five feet smaller than an NHL hockey rink. At one point, planners discussed making it a third larger. As a result, the green space is in front of the Rotary Amphitheater. Brainard said the ice skating rink will likely start somewhere near where the center sidewalk that currently bisects the green space. Brainard said he’s also considering ways to preserve as much green space as possible, especially for the summer months. It’s possible that sod could be put down over the rink in the summer at the city’s expense.

The maximum capacity of the rink will likely be 600 or 700 people, Brainard said.

There will be a cost for skate rental and possible a nominal fee to use the rink, Brainard said. A refrigeration system will be used to chill the rink during unseasonably warm winter months. A Zamboni will be used and stored in an empty booth at the Christkindl market.

Orignally, Brainard said he thought construction could begin in the late spring or early summer, but he said now it looks like it could be around September.

“I promised that it won’t interrupt the Farmers Market,” he said.

As a result it might be a quick turnaround to get the rink and square ready by Christmas time, but he said it’s possible.