You are at:Home»Current in Westfield»Proposed roundabout for Village Farms neighborhood faces uncertain future 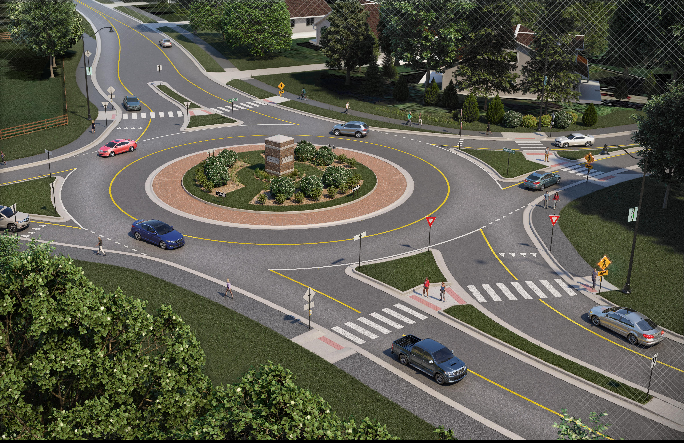 The City of Westfield was granted approximately $2 million to construct a roundabout at Oak Ridge Road and Greyhound Pass. The proposal received backlash from Village Farms neighborhood residents. (Submitted rendering)

Based on traffic studies and the future of an intersection just north of it, City of Westfield officials believe Oak Ridge Road and Greyhound Pass requires roundabout.

The city received a $2 million grant to construct a one-lane roundabout at the intersection, but the proposal met resistance from Village Farms residents. The roundabout has been put on hold, and if the city doesn’t decide to take the grant in the next few weeks, it will not be able to accept it.

“We had federal dollars toward the project to build a roundabout,” Communications Director Erin Murphy said. “Public Works has done numerous traffic studies which has shown it would be safer to build a roundabout. They were trying to work with Village Farms residents to come to a consensus and to show this is what our studies have revealed to us. Village Farms residents were very outspoken, and they really don’t want that intersection to be a roundabout.”

The project has been in discussion for approximately two years, and council members, public works staff and  Mayor Andy Cook have spoken to Village Farms residents.

“It became all too clear this is not what they want,” Murphy said.

Despite the grant, Murphy said there will need to be a roundabout at the intersection in the future, but there is no  timeline. A roundabout also will be constructed at Oak Ridge Road and 156th Street.

“Once that happens, traffic is going to really flood that intersection at the four-way stop at Greyhound Pass and Oak Ridge Road,” Murphy said. “Roundabouts are meant to be safer and more efficient. That will be a more efficient and safer way for people to go and travel, and they will use it and end up hitting that four-way stop, which will make that intersection less safe because it’s not a roundabout.”

The Village Farms HOA Board has not taken a position on this intersection and has remained neutral. A letter was sent to all Village Farms residents last week explaining what had taken place over the last year.” HOA President Doug Holtz stated in an email. To provide feedback on the project, email councilmembers@westfield.in.gov.