You are at:Home»Night & Day»Artist Profile»The sounds of service: Local musician played in the Marine Corps Band

Submitted story by Ronald P. May

Military service has many sounds.  Boots striking the pavement as formations march in perfect step.  Platoon leaders shouting out cadences.  Weapons popping from the firing range. 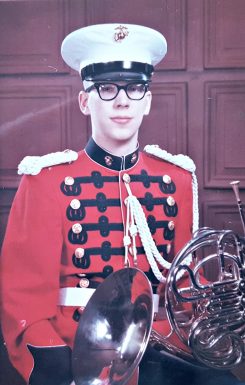 John Richardson with his French horn in the 1960s when he performed with the Marine Corps Band. (Submitted photo)

But to John Richardson of Thorntown who served in the United States Marine Corps Band in the 1960s, the sounds of military service were quite different.  His service was marked mostly by the sounds of music.

And they are the same sounds that have marked his life since then.

“I knew I was going to be a musician from early on,” he recalled.

Following his graduation from Fort Wayne South High School in 1959, he enrolled at the prestigious Eastman School of Music at the University of Rochester in New York.  He completed a Bachelor’s of Music in 1963 with a concentration in French horn and Piano.

He was accepted into a Master’s degree program in music at Northwestern University, where he graduated in 1964.

During his senior year at Eastman School of Music he had written to all of the service bands to see if there were any openings.  A year later he received a letter from the Marine Corps Band stating that there was an opening with the French horn.

He traveled to Washington D.C. for his auditions.  And on June 10, he was offered and accepted a position in the Marine Corps Band.

Although they didn’t train for combat, the band members did have arduous duty and long days.  Band rehearsals were every morning and concerts and other events were in the afternoons and evenings.

The Marine Corps Band, which consisted of 100 members, typically performed about 1,350 times a year.  Each Marine played two-to-three times a day. 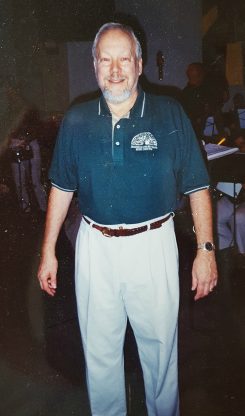 “It was grueling,” recalled Richardson.  Each day of the tour involved a long bus ride of 4-6 hours and then an afternoon concert for students.   The long day capped off with a two-hour formal evening concert.

Playing at military funerals at Arlington National Cemetery was another official duty for the Marine Corps Band.  As it was the Vietnam era, Richardson remembered there being many funerals for service members who died in combat.

He also played for the funerals of two presidents:  Herbert Hoover in 1964 and Dwight D. Eisenhower in 1969.

Richardson served in the Marine Corps Band from 1964 – 1970.  During those six years he played for the inaugurations and the White House Dinners for two presidents: Lyndon Johnson and Richard Nixon.

“You froze to death in January, but they were special,” he said of the presidential inaugurations.

“You were a part of history,” he recalled.

In 1970 he had fulfilled his initial commitment and decided not to re-enlist.

“I had decided to devote my life to two areas: teaching music to children and adults and serving as a church musician,” recalled Richardson.

He has been doing both ever since, mostly in churches as organist and choir director.

All together he has been serving as a church musician for more than 40 years.

His more recent music love has been serving as director of the Zionsville Concert Band for the last 15 years.  The band is his pride and joy.

“I consider music a gift of God and I want to impart as much as I can to the people I work with,” he said.

And the sounds of his music continue today.

Ronald P. May, USN (Ret.), is Chaplain at Hoosier Village Retirement Community and author of the book, “Our Service, Our Stories.” He helps veterans share and preserve the stories of their military service. For more information or to tell your story, contact May at 317-435-7636 or by email at yourlifestory@live.com. You can also follow him on Facebook at Our Service, Our Stories.