The Dirty Heads, an alt-rock, hip-hop and reggae band, hail from and reside in California, but have deep ties to Indiana. 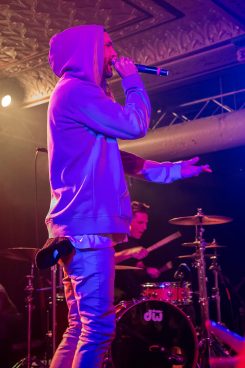 The Dirty Heads frequent the Hamilton County area during tours, for band meetings, and to check in on the salons.

Artist Jared Watson said managing the Dirty Heads began as a passion project for Brown, and the band manager didn’t take a commission for the first five years as the band developed.

“If that’s not showing you trust and loyalty, I don’t know what is,” Watson said.

Watson gained financial success through performing, but decided to secure that success by investing in Kiss Kiss Bang Bang salon.

Due to the success of the salon, Watson said the investment was low risk and high reward.

“The music industry and being in a band is very fickle,” Watson said. “The security isn’t there.”

According to Watson, Swordbeach is a mash-up of ‘90s hip hop nostalgia, alternative singer/songwriter and 2020 sci-fi.

“The timing was right to do it now,” Watson said.

Watson said he is just as passionate about Swordbeach as he is about the Dirty Heads. Watson developed all of the anime-inspired artwork for the project and will be releasing a new song each month for the next five months.

For more on the salon, visit kkbbsalon.com.