You are at:Home»Current in Carmel»Carmel Community»Carmel High School’s swim dynasty rolls on 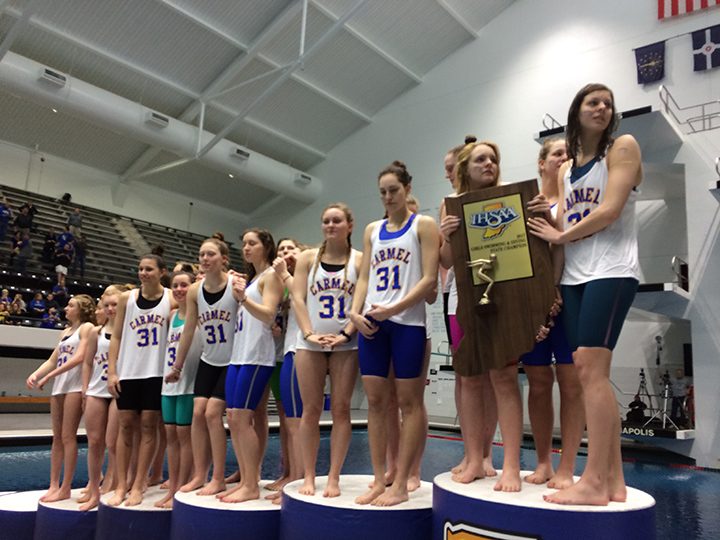 The Carmel High School girls swimming team was able to quietly go about its business of winning this season.

In 2016, there was a buzz was about the Greyhounds setting a national record for all sports by winning a 30th consecutive state championship. That created more pressure than usual.

“There wasn’t as much media attention paid and no one was coming to our pool as much,” CHS coach Chris Plumb said. “This year was about stepping up and doing what we’re capable of doing.”

Carmel captured its 31st state swimming and diving title Feb. 11 at the IU Natatorium at IUPUI in its typical dominating fashion with 386.5 points, nearly 200 more than second-place Chesterton (189). Carmel won eight of 12 events.

“This is a really special team that came together at the right time,” Plumb said.

Carmel senior Sammie Burchill set a state record in 200-yard individual medley with a time of 1:56.67. It was her second straight state title in that event.

“It feels great finishing off four years,” Burchill said. “It’s pretty bittersweet, but there is no other way I’d rather go out. (Winning) with these girls who worked hard. As the meet went on we definitely gained momentum. We finished strong.”

In addition, Burchill was on the winning 400 freestyle relay and 200 medley relay teams and was second in the 100 backstroke.

Burchill will join her sister, 2016 CHS graduate Veronica, on the University of Georgia team next season.

“Sammie is a big-time performer,” Plumb said. “We talked about getting that record on the bus ride home last year. Sammie’s attitude has always been if (Veronica) can do it, so can I. That’s been Sammie’s attitude since I know her. Veronica came here and set the state record (in the 100 butterfly in 2016) and she wanted to do the same.”

Emma Nordin, a senior who is headed to Arizona State, captured her second straight 200 freestyle title and third 500 freestyle state championship in a row. She also was on the winning 200 freestyle and 400 freestyle relay teams.

“A special story was Katie Dougherty, who hadn’t swum in this (state) meet before, came in and got second in the 500 free,” Plumb said. “This was the first year she ever made the team. Those are types of kids that are unheralded. They embrace the culture and do the work and they’re ready to step up when their name is called.”