One acting camp and Lex Lumpkin was hooked.

“I like being on stage in front of people, entertaining people,” Lex said. “I just get the thrill of it. It’s really fun.” 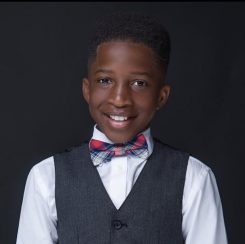 The Fishers resident will debut in the title role in the Indiana Repertory Theatre’s production of “Stuart Little,” held Feb. 25 to March 26 at IRT, 140 W. Washington St., Indianapolis. There are two matinee performances at IRT on every Saturday and Sunday during that span. In addition, the cast will be doing performances for school-children through the week. His mother, Tommalisa Lumpkin, said there are more than 50 performances.

“I don’t like memorizing the lines, that’s the down part,” Lex said.

Tommalisa said her son is good at it.

“He knows everyone else’s lines, too,” Tommalisa said. “If you say your line wrong, he’ll say ‘No, it’s this.’”

Lex, 11, said he watched the “Stuart Little” movie and read the book a couple of times.

Stuart is a boy-like mouse who falls in love with a bird named Margalo.

Following the acting camp he took last summer at IRT, Lex was invited to audition.

“We were shocked when he got it because there were 10 other boys auditioning,” Tommalisa said.

His father, TiJuan Lumpkin, signed up him up for the acting class because Lex kept asking if he could audition for a commercial or a play.

During the weeks of the show, Lex’s grandmother Effie Alexander, a retired teacher, will come to Florida help him keep up with his schoolwork.

“She’s a strict woman, too, it won’t be an easy ride for him,” Tommalisa said.

Lex’s brother, TiJuan Jr., a sixth grader who goes by T.J., also took the acting camp. He might want to act as well but singing is his real love.