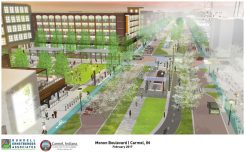 The City of Carmel announced today a major widening and expansion of the popular Monon Greenway through the heart of Midtown and the Arts & Design District – a new Monon Boulevard that will transform the current 12-foot wide path into a multi-faceted 140-foot wide right-of-way section that will include new dedicated lanes for cycling, buffer zones, sidewalks, green spaces, one-way streets with additional parking on either side of the trail and a new Midtown Plaza at 4th Street SW near the Allied Solutions corporate headquarters.

The expanded trail will serve a rapidly growing Midtown redevelopment area where the city is partnering with private developers to create a new, vibrant corridor connecting our City Center and Arts & Design redevelopment districts, which will include a mix of offices, restaurants, retail and residential units in what was once city’s primary industrial area.

“This new expanded Monon Boulevard will quickly become a major epicenter of activity in Midtown and the Arts & Design District; a place where our residents and visitors will be able to take a stroll after a show at the Palladium, walk or bike to dinner or spend a Saturday afternoon with their children and pets on the trail or in one of many new green spaces and plazas,” stated Mayor Jim Brainard. “It is also designed to function as a corridor for many who will live and work in this area, providing a safe way to commute to their jobs or take a short walk to the market.”

An average of more than 300,000 people run, walk or bike on the Monon Greenway from Main Street traveling south to the Palladium each year, making it one of the most congested stretches of the trail in Carmel. The new project will separate those who are on the trail for leisure and those who are more aggressively seeking physical activity.

Plans call for work to begin by July of 2017 and take about 12 months to complete. The estimated cost of the Monon Boulevard and Midtown Plaza projects ranges from $20 million to $23 million, which will come from a variety of sources including bonds and developer commitments. The Monon Greenway will be detoured during portions of this construction project.

Submitted image and information courtesy of City of Carmel. To read more about this project and see a video by reporter Adam Aasen, visit youarecurrent.com/carmel-to-announce-23-million-in-monon-trail-upgrades