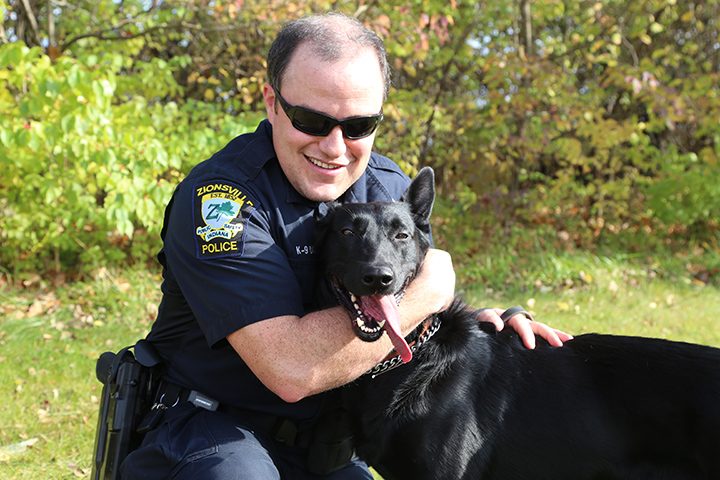 For as long as he can remember, Josh Stutesman has had one very specific career goal.

“I always did want to be a police officer and a K9 officer,” Stutesman said. “I’ve always had dogs my whole life. Knowing what they’re capable of and how they can definitely do more than what humans can do, which makes this a safer community, is what I wanted to do.” 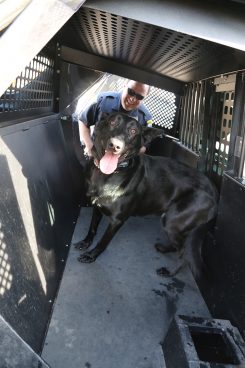 ZPD officer Josh Stutesman loads Jelka into the back of his police vehicle, which has special equipment to ensure she cannot be left trapped in hot conditions. (Photos by Ann Marie Shambaugh)

Stutesman has been an officer with the Zionsville Police Dept. for six years, but in August 2016 he finally got to fulfill his dream of working with a police dog. Jelka, a nearly 2-year-old Belgian Malinois, joined ZPD after six weeks of training at Vohne Liche Kennels in Denver, Ind. Vohne Liche specializes in training social police dogs and has worked with the National Security Agency, Pentagon Police U.S., U.S. Army and some of the nation’s biggest police departments.

Jelka was born in Sweden and received specialized training before being matched with Stutesman, so his six weeks of training consisted of bonding with the dog and learning how to communicate with her – in Dutch. The trainer who worked with her as a puppy used Dutch commands, and Stutesman said it’s easier to teach humans a few Dutch words than to reteach a dog all of its commands in English.

“That’s the only other language I know, those things I need to (command) her,” he said.

He also learned that the key to communication isn’t always what he says, but how he says it. Jelka is trained to react to situations in part by the tone of voice Stutesman uses.

“We actually had to go through two days of training to do the high-pitched voice, because as a cop you don’t want to sound like a Disney character, but we had to get used to that so she realizes, ‘OK, dad’s happy now,” he said. “If we go into the pirate voice, the deeper, almost like a cold type of voice, she knows that daddy’s on edge and that she needs to go to work and watch out.”

Jelka loves her job, Stutesman said, because to her it’s all play. She was selected as a possible law enforcement dog at a young age because of her strong drive to chase a ball, an instinct used to train her for police work.

“Everything that they’re trained for is just to get that ball, so basically it’s play for them. They don’t realize that they’re working,” Stutesman said. “That’s exactly what you want in a police dog.”

Jelka is trained to chase down suspects, search for lost children and sniff out drugs, among other things. Stutesman said she’s already helped police discover illegal substances on several occasions.

She also serves as a friendly ambassador for the department, helping to diffuse tense situations.

“It helps the kids to be able to relax, too, (and see) everything’s safe now,” Stutesman said. “The dog is automatically the hero, and that’s fine because she does all the work, anyway, and I just walk behind her.”

ZPD Chief Robert Knox said Jelka is fitting in well and has been a welcome addition to the force.

“Just the presence sometimes of a K9 will take the wind out of people’s sails if they have some bad intentions of resisting or running,” he said. “If you get the right dog, it’s just amazing what it brings to the table and the community.”

For Stutesman, having Jelka at his side has been more than a dream come true.

“She’s been a blessing,” Stutesman said. “It’s been well above what I ever could have imagined.” 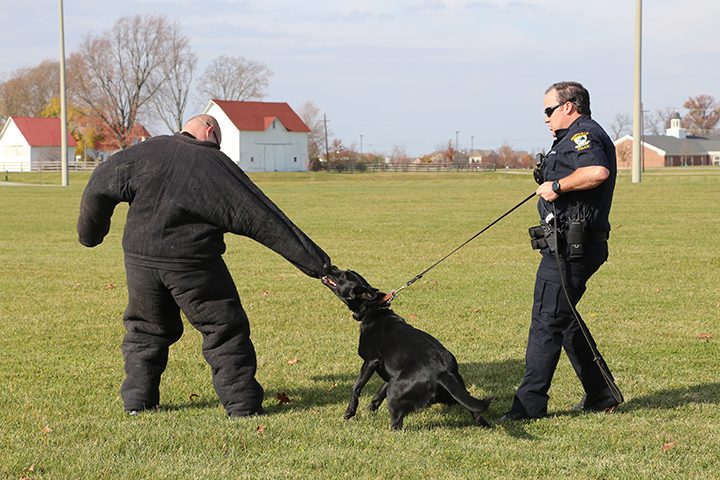 Jelka accompanies ZPD officer Josh Stutesman when he’s on duty, typically 6 p.m. to 6 a.m., but she’s also become a member of his family.

Stutesman, his wife and their toy poodle, Ruthie, live in Westfield and were all eager to welcome Jelka into their home.

Although Jelka is the canine with advanced training, she defers to Ruthie when they are together.

“Ruthie’s a nine-pound terror of the house, and Jelka knows it,” Stutesman said.