You are at:Home»Current in Westfield»Westfield football coach nominated for NFL Don Shula High School Coach of the Year 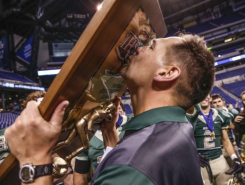 Gilbert was nominated by the Indianapolis Colts. The award recognizes high school football coaches that display leadership and integrity exemplified by the winningest head coach in NFL history, Don Shula.

By virtue of the nomination, Gilbert attended the USA National Football Conference and the Pro Bowl Jan. 29. in Orlando. Each NFL state nominated a high school coach for the honor.

“There are several speakers and meetings about learning ways to be more influential and impactful,” Gilbert said of the conference. “It’s an enormous honor. I’m super honored to be here in the company of great coaches and to grow as a coach.”

WHS was able to purchase new computers with money received from the award, which Gilbert said were desperately needed.

As for what’s next for Gilbert, he doesn’t see himself leaving WHS.

“I love it here. I am really excited about future challenges,” he said. “I am hopeful to have the opportunity to coach my own son someday, and I’m excited to finish the work and all the connections we have made with so many kids and families here in Westfield. I’m excited to see it through. This was an amazing year, and all these honors and accolades are cool, but we just view it as an awesome step in an overall journey.”