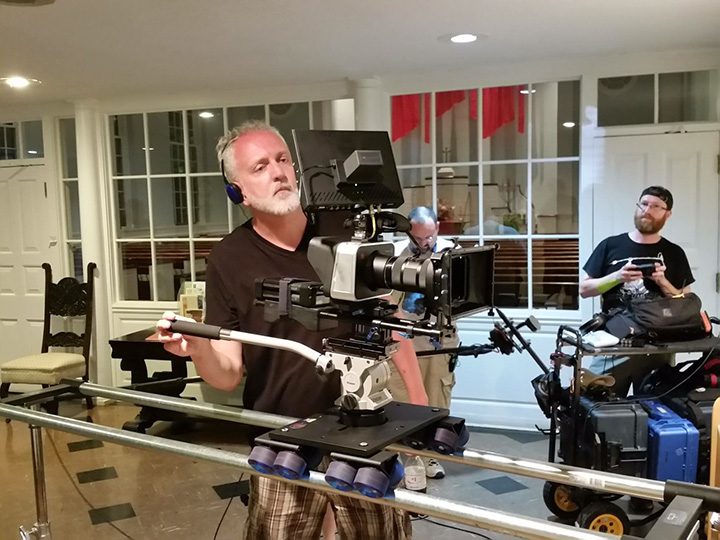 Director Mark Nash on Carmel on set of “The Homecoming.” (Submitted photo)
by Heather Collins

A group of local filmmakers are proving Indiana can indeed be a part of film culture, with the making of local short film “The Homecoming.” The film crew includes writer, producer and cinematographer Dan Cavallini of Noblesville, producer and writer Bruce Northern of Geist and director Mark Nash of Carmel.

“It’s about going home to tend to old wounds, and the wounds weren’t what you thought they were,” Cavallini said of the film.

According to Nash, Indiana doesn’t offer the tax incentives, and therefore doesn’t have the infrastructure, for film crews and companies to benefit from filming in Indiana. Nash cited “The Fault in Our Star” as a prime example of how Indiana is missing out on film revenue. The Fault in Our Stars was filmed in Pennsylvania with a set built to replicate Indianapolis.

“We’re trying to connect something here where folks can stay in the state and keep the money here,” Nash said. “We’ve made this film as a good example that we can make good films with quality actors here in Indiana.”

The cast and crew consist of members of the Screen Actors Guild and the Indiana Filmmakers Network. The Homecoming includes the acting debut of Nash’s two stepsons as well as a cameo by his veteran-actor wife, Shani Salyers Stiles.

The film’s score was done by Virgil Franklin, assistant professor of audio recording and production at Vincennes University, and includes the original song “Temporary” by Slaid Cleaves, an Austin-based singer-songwriter.

“This film taught me the joy of collaboration,” Northern said.

The majority of “The Homecoming” was filmed in Indianapolis and Marion County.

“The reason I wanted to get involved and helped produce this film is because it not only includes a phenomenal cast and crew, but proves that Indiana has the talent and strong work ethics that it takes to make a great film come together,” stated Homecoming film producer Amy Pauszek.  “This film was made locally and it was amazing to see how the community of Lawrence supported it. We recently posted our movie trailer on various social media sites and everyone loved it. People often ask what happens next after a film is finished. Our next step for ‘Homecoming’ is to enter it into the very best film festivals, not just locally but also to film festivals around the world. This is a way for others to experience a well-written, heartfelt story and see the incredible work by all who are involved. I’m proud to be a part of this amazing short film and am so honored to be surrounded by actors, crewmembers and friends who strive to educate and inspire others through art and film.”