For two sisters from Noblesville, stepping on the stage is something that’s both familiar and fun. Ali and Kate Boice already have established resumes at the young ages of 11 and 9 respectively, and they are adding a new performing credit this month with the current production of “Joseph and the Amazing Technicolor Dreamcoat” at Beef & Boards Dinner Theatre. 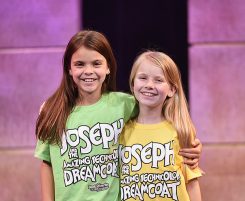 Ali and Kate Boice will perform in the children’s choir for “Joseph.” (Submitted photo)

The Boice sisters will perform in the second of three children’s choirs for the show. Theirs, the “Red Choir,” is featured in the performances from Feb. 21 through March 8.

But it’s not the first time the daughters of Mark and Kristen Boice have shared a stage.

Together the girls kicked up their heels last summer in Stonesoup’s production of “Oklahoma!” with Ali in the role of Ado Annie and Kate in the chorus playing Vivian. In the summer of 2015, Ali and Kate were the Sour Kangaroo and Young Kangaroo respectively in “Seussical Jr.” with Stonesoup. They also performed in The Belfry’s production of “A Christmas Carol The Musical” in December of that year. Ali’s portrayal of Tiny Tim earned her an ENCORE nomination for “Best Performer Under the Age of 18 in a Musical.”

“They also like having some shows to themselves,” Kristen said.

This happened last spring at CYT, when Ali was in the chorus of “Mary Poppins” and Kate played May Belle in “Bridge to Terabithia.”

“I love to be on stage because I feel alive when I’m on stage,” Ali, a fifth-grader at Legacy Christian School, said.

But the girls agree that memorizing their lines is the most challenging part of being in a show.