Between work and three young children, Earl Campbell hasn’t acted for three years but his newest role was too delicious to pass up. 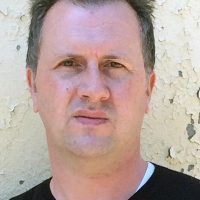 Campbell plays a narcissistic actor named Steve in “The Money Shot” Feb. 17 to March 4 at the Theatre on the Square, 627 Massachusetts Ave., Indianapolis.

“On the spectrum of one to 10, he’s a solid eight or nine,” said Campbell, a 46-year-old Noblesville resident. “He’s a self-absorbed aging actor, past his glory day, trying to revive his career. It’s the darker side of ego. I’ve read a few books of narcissism to inform myself about the role. It’s a fascinating study. Anytime you have that ability to tap into the darker side that is in all of us.”

Campbell had worked with director Lori Raffel in other productions with different theaters.

“When Lori took over (as TOTS artistic director), she sent scripts my way and this is the first one I really felt passionate about because it was so fierce, funny and daring in subject matters,” Campbell said. “The language is very not PC. It’s not family friendly.”

Sarah McGee, a Carmel resident, performs as an actress named Karen, who is trying to revive her career as well. The other two performers are Lisa Marie Smith and Lauren Hall.

“I have worked with every one of them before, and couldn’t wait to work with them again,” Raffel said. “It’s one of those plays that when I read it for the first time, I pictured these people in my mind. I was lucky to get them.”

“Earl’s character says some very controversial things,” Raffel said. “He believes that whatever it says on Answer.com is gospel, so he is misinformed much of the time. It’s funny, but unless you have someone charming and likable to play the part, he can be disliked by the audience. Earl is one of those actors that the audience loves — no matter what the character is that he plays.”