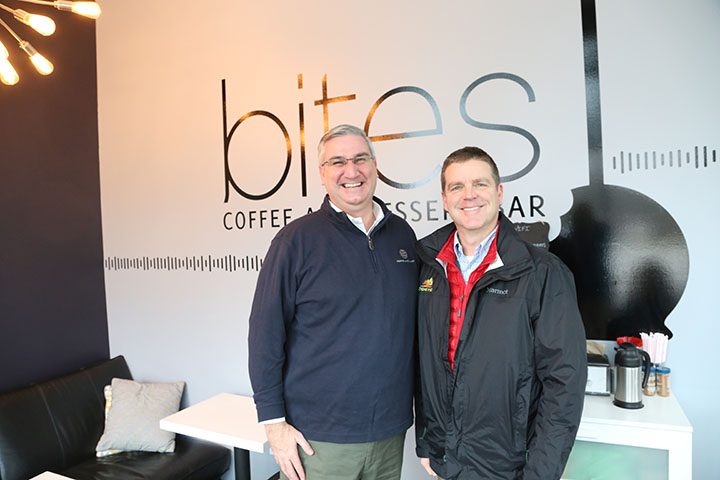 A month into his new job as Indiana governor, Eric Holcomb isn’t upset that he’s not yet been able to move into the governor’s residence, which is undergoing renovations.

With a home near 86th Street and Moore Road in northwest Indianapolis, it’s an easy drive to work at the Statehouse and to one of his favorite places to relax – downtown Zionsville.

“(Main Street) is where we walk our dog,” said Holcomb during a stop at Bites coffee and dessert bar on Feb. 3. “We know the area well.”

The governor spent a day visiting with several Zionsville business owners and gathering feedback on what his administration can do to help them succeed. After a morning stop at FedEx, Holcomb enjoyed lunch at the Friendly Tavern, had his hair cut by a fellow Navy veteran at Mike’s Barber Shop and visited Black Dog Books, among other stops.

Holcomb praised Zionsville for creating a “dynamic environment” where businesses can thrive.

“We need to make sure that’s happening all over the state of Indiana on a larger scale,” he said. “Anything that the state can do to cultivate these entrepreneurial pursuits, all the better.”

The past year has been a whirlwind for Holcomb. Selected to replace former Lt. Gov. Sue Ellspermann in early 2016, his campaign to retain his post became a run for governor after Donald Trump selected former Indiana Gov. Mike Pence as his running mate in July.

In November, Holcomb and Pence won their election bids, and the two fraternity brothers from tiny Hanover College are now among the most high-profile political leaders in the nation.

“It was emotional for me to see (Pence) on stage, watching him sworn in as the vice president of the United States of America,” Holcomb said. “Certainly, having a vice president from your home state would be an advantage to any state, and I consider it a blessing.”

Holcomb entered into his role with Indiana in a “strong position,” he said, and he believes the time is right to build bridges with Hoosiers from across the political spectrum and work together for positive change.

“I don’t want to squander this moment in the political galaxy,” Holcomb said. “The stars are aligned to really get a lot done, and I think it’s more than an opportunity, it’s a responsibility to truly seize the day.”