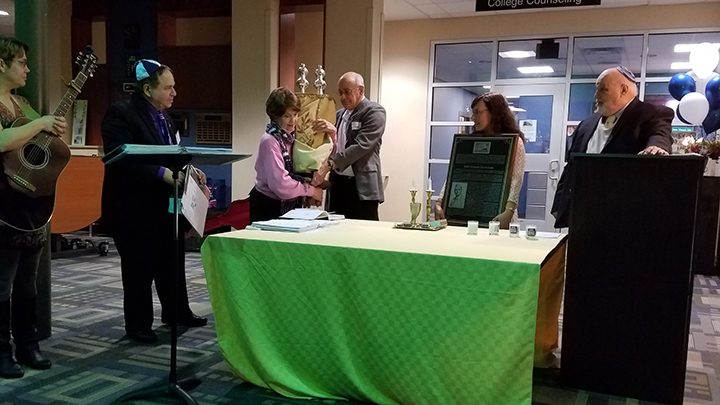 Stan Steiner of Sinai Temple officially dedicates the Torah to Congregation Beth Shalom by passing it to Karen Friedman, president of the board of directors. (Photo by Desiree Williams)

Congregation Beth Shalom of Indianapolis held a special service Jan. 27 to dedicate a new Torah from the Sinai Temple of Marion. After 80 years of services, Sinai Temple has closed and gifted its Torah to CBS. 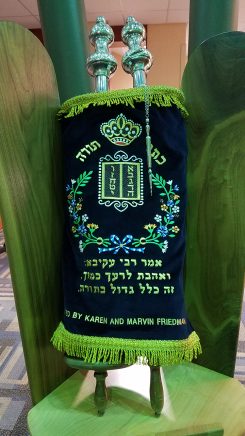 The Torah contains the law of Moses and the basic guidelines of Judaism. This specific Torah is significant to CBS because Rabbi Alexander D. Goode – one of the legendary Four Chaplains – used it during his time as a student rabbi at Sinai Temple from 1936 to 1937.

“We were looking for a Torah that was smaller and one that we could handle a little bit better,” CBS Rabbi Stanley Halpern said. “The fact that Rabbi Goode, that that was his congregation, just to me brought home that this was just meant for us.”

Goode is one of the Four Chaplains who died when German U-boats sank the U.S.A.T Dorchester in 1943. All four Army chaplains ¬– Goode, The Rev. George Fox, Father John Washington and The Rev. Clark Poling – came from different religious backgrounds, but they worked together to save as many lives as possible before giving up their own life jackets for others.

“To those from the congregation that have a link to the military, the fact that it was in that way a Four Chaplain Torah meant everything,” Halpern said. “We were just thrilled.”

As a Reform congregation, CBS emphasizes ethics over ritual. Halpern commemorates the Four Chaplains every year to remind the congregation of their goal and how the chaplains’ story is the perfect representation of that.

“It’s something that’s been part of Reform Judaism forever,” he said. “If we work together we can make the world into what we want it to be, rather than what it is.”

CBS holds services the second and fourth Friday of every month in Carmel at University High School, 2825 W. 116th St.