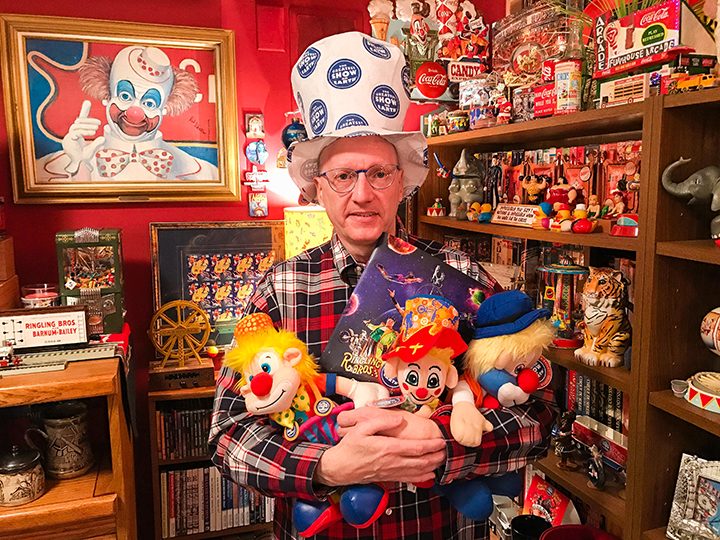 Don West, of Fishers, collects circus memorabilia that highlights the history of the circus in America. (Photo by Feel Good Now)

There are more sad clown faces than usual at Ringling Brothers Barnum and Bailey Circus this month. RBBB, “The Greatest Show on Earth,” is closing after 146 years.

No one is sadder or more shocked by the news than Don West of Fishers. West owns one of the premier collections of carnival and circus memorabilia in the Midwest. The lower level of his home is filled with eye candy for anyone who has ever ridden a roller coaster, seen a sideshow or gone to a circus.

West started out as a young man doing traditional model railroad collecting, but somewhere along the line he got off track. Ironically, it was after his change in direction that he learned circuses and carnivals ran in his family, way back to his great-great-uncle and grandfather, who owned a sideshow.

His first carnival model was a small die-cast replica of a ‘Tilt-A-Whirl,’ which is still his favorite piece. But now his home is filled with models of more than 100 rides and attractions, virtually all in working order. There are tiny replicas of sideshows, food stands and fun houses.

He also has a workshop where he constructs his models from kits or, in some cases, builds them from scratch, often combining parts from different sets.

“It can take 100 hours to build one of these rides,” said West, who enhances the final product by repainting each part to make it look even more authentic. 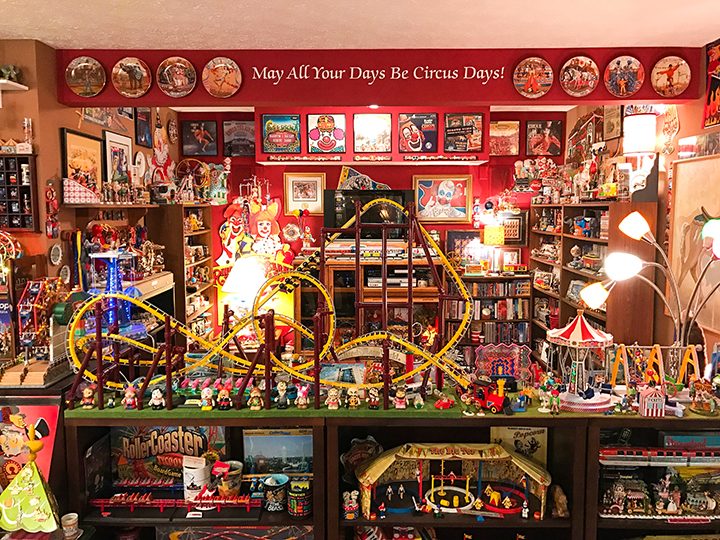 Some of West’s circus collection in his Fishers home. (Photos by Feel Good Now)

Much of West’s memorabilia is from RBBB: circus trains made to scale, banners, lithographs, books, records, videos, cups, souvenirs, programs — stuff going back almost a century.

“It’s the greatest little show on Earth,” West said of his collection.

Sadly, there does not seem to be a future for people who collect.

West has reflected on several factors that likely contributed to RBBB’s demise: Pressure from animal rights groups over the years, and technology that puts entertainment right on your cell phone.

“Getting kids to sit for three hours became more difficult,” he said.

West does not want us to forget the important role the circus has played in our culture. It brought a sense of wonder and a taste of the exotic, often to rural communities that would have been otherwise isolated from such influences. Multi-cultural acts, people of different colors, sizes and shapes, animals that few had ever seen close-up — not to mention big bands and one of the first movie theaters in the country.

It also was the circus, West said, that helped teach the United States government how to effectively load and unload heavy cargo during World War II, something RBBB was especially adept at, having to perform that chore scores of times each year as it traveled from venue to venue with its trains. 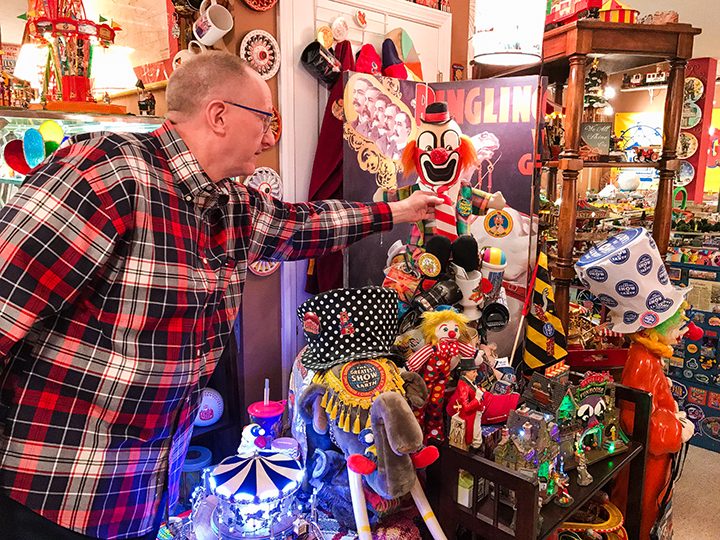 West works on some of his memorabilia.

As a kid in New York, I probably saw the circus a half-dozen times at Madison Square Garden.  I remember walking into the arena, overwhelmed by the colors, sounds and cotton-candy aroma, and awed by parading elephants, growling lions and tigers, dancing bears and trapeze artists. No vision had ever compared to that, though I must admit that years later, my first glimpse of the ball field in Yankee Stadium came awfully close.

And then there was Emmett Kelly, the most famous sad-faced clown in history. His iconic act at the end of the show involved sweeping up the tiny spot of light projected from high above the arena floor. His efforts always failed, but he was persistent and resolute. Like Emmet, circus fans still have faith, hoping that the circus will find a new owner. For so many who love the “Greatest Show on Earth,” they do not want it to end up in the dustpan of history.

The circus has even affected modern-day American language.

To see a video about Don West and his collection of circus memorabilia, visit tinyurl.com/jnzlx6x