You are at:Home»Current in Carmel»Carmel Community»Center for the Performing Arts names new vice president of finance

An executive with significant not-for-profit experience will begin work Feb. 7 as vice president of finance at the Center for the Performing Arts. 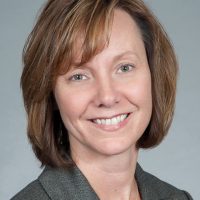 Carmel resident Susan Springirth comes from a similar position at the Indianapolis Neighborhood Housing Partnership, which she joined as vice president of finance in 1999 and served most recently as executive vice president for finance and operations. She worked previously as controller and leader of the finance, technology and human resources team for the National FFA Organization, based in Alexandria, Va., and later Indianapolis.

In her new role, Springirth will be a member of the senior management team, providing oversight, advice and strategic leadership on financial and business matters for the Center and its affiliated organization, the Great American Songbook Foundation. With an annual budget of $10 million, the Center is marking its sixth season of presenting events and hosting six resident companies at its Palladium, Tarkington and Studio Theater venues.

Jeffrey C. McDermott, interim president and CEO for the Center and the Foundation, said Springirth brings the right experience to the position at the right time.

“Sue understands the dynamics of not-for-profit organizations and will be a crucial member of our team as we strengthen and grow the Center’s operations,” he said.

Springirth holds a bachelor’s degree in accounting from Virginia Polytechnic Institute and State University and a CPA from the American Institute of Certified Public Accountants. She also serves on the Board of Directors for Girl Scouts of Central Indiana. She has lived in Carmel for 20 years and has two daughters, ages 6 and 13.

*Source: Center for the Performing Arts