You are at:Home»Night & Day»Artist Profile»Zionsville fourth-grader follows in her sister’s footsteps onto the Beef & Boards stage

Claire Kauffman sat in the dark, watching her sister Cynthia perform as Wednesday Addams in “The Addams Family” at Beef & Boards Dinner Theatre, and she was inspired. 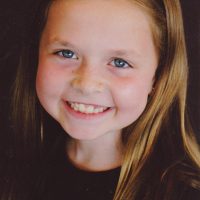 “I thought it looked like fun,” she stated. “So I decided to try out for ‘Joseph.’”

Her audition earned her a spot in the first of three children’s choirs performing during the run of “Joseph and the Amazing Technicolor Dreamcoat” at Beef & Boards Dinner Theatre. Kauffman is in the first choir, performing from opening day Feb. 2 through Feb. 19.

Now 10 years old, Kauffman has been performing for half  her life. Her favorite roles include Mopsy in “Peter Rabbit” and Betsy Cratchit in “A Christmas Carol,” both at IRT.

“I also love to do shows at The Black Box, The Biz and at my school,” she stated.

The Zionsville fourth-grader attends Pleasant View Elementary. She said the most difficult part about being in a show is missing school.

“My school and teachers have been great,” she stated. “Even though I am at the theatre a lot, I still have to make time for my homework.”

She has the support of her 16-year-old sister, Cynthia, who inspired her in the first place.

“She helps me practice my lines,” Kauffman stated.

When she isn’t performing, Kauffman enjoys doing arts and crafts, science experiments, tap dancing and spending time with her friends. Someday she hopes to be an actress, teacher or scientist. She is the daughter of Scott and Kim Kauffman.