You are at:Home»Current in Westfield»Wellbrooke of Westfield resident celebrates 100th birthday

Leah Jacobson said she doesn’t have a specific reason for reaching her 100th birthday.

“I don’t have any secret,” Jacobson said. “I just live a day at a time, doing everything in moderation, I guess.” 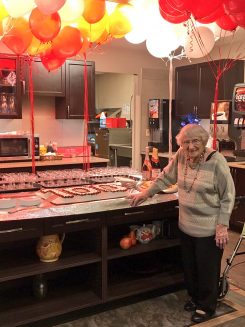 Her genes helped as well.

“I’ve been blessed with parents who lived a nice, long life,” Jacobson said. “My dad lived into his late 90s when he passed, and my mother died in her late 80s.”

Jacobson turned 100 Jan. 10, and there was a celebration of cake and balloons with family and friends at Wellbrooke of Westfield.

Jacobson has three sons: Jerry, who lives in Westfield; Melvin and his wife Deborah live in Elkhart; and Moe and Beverly live in California.

Her sons made it in for the 100th celebration, along with the spouses for the two that are married. However, Jacobson said there is another celebration planned in April when her five grandchildren and seven great-grandchildren can make it in.

After the party, Jacobson played cards with her friends. She enjoys regularly playing bridge and Mahjong.

Jacobson has lived in Indiana since she was 7 years old, growing up in the Elkhart area.

Jacobson did her nursing training through Indiana University in Indianapolis from 1935 to 1938. She lived in Chicago with her husband until he served in World War II. Then she moved to her parents’ home near Elkhart when he was in the military, and she did private nursing service. They ended up settling in Elkhart. She worked in a doctor’s office for 25 years.

“It was part-time so it was easy to manage my children, helping with my parents,” Jacobson said.

Her husband died at age 68 from leukemia. She moved to Westfield eight years later, living in a condo. She moved into Wellbrooke two and a half years ago.