You are at:Home»Current in Westfield»Marcotte rises in administration at Riverview Health

Westfield resident Dr. Eric Marcotte is no stranger to administrative roles. This month, he embarked on a new administrative path as Chief Medical Officer at Riverview Health. 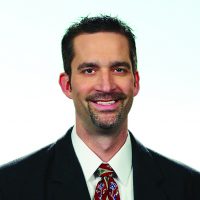 Marcotte replaces Dr. John Paris, who served in the role for more than a decade.

Five years ago, Marcotte, a family physician, stepped into the role of elected medical president at the Sheridan Riverview facility and began considering pursuing administrative work as a doctor. As he neared retirement, Paris encouraged Marcotte to apply for the CMO position.

“I am the interface between the physicians and the hospital administration,” Marcotte said. “I see the position as trying to make sure that our doctors and nurse practitioners have the resources and the support they need to be able to concentrate on their patients and patient care.”

To accomplish his new tasks, Marcotte listens to and advises staff on a variety of issues. Although his responsibility has expanded, Marcotte isn’t quite ready to give up his medical practice. He plans to split his time between Riverview Health’s hospital in Noblesville and his practice in Sheridan.

“Nationwide, most chief medical officers still practice at least some, and it helps other doctors to know I have to live by the rules, too,” Marcotte said. “I enjoy being a doctor, and I don’t want to give that up. I grew up in a town very much like Sheridan, and I’m comfortable with farmers. I really enjoy the other doctors that are there. I have two very good partners, and it makes for a very good environment and great people in that little town.”

Paris was a heart surgeon before retiring as a practicing physician.