You are at:Home»Current in Carmel»Carmel Community»Council members have ax to grind about tree removal along Monon 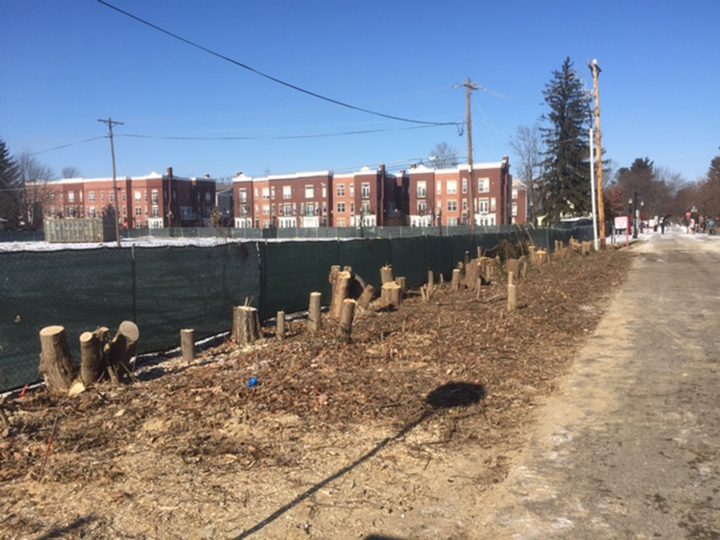 Trees along the Monon Trail were recently cut down to make way for a new mixed-use development. (Submitted photo)

For years, city councilor Ron Carter disagreed with Carmel Mayor Jim Brainard about trees along the Monon Trail. The two have been close political allies in the two decades they have served in office, but this is one issue Carter said they’ve never agreed on.

“The mayor and I have been at odds when it comes to trees along the Monon for the better part of a decade,” Carter said. “I remain firm that I don’t like to see the trees taken down, and my thoughts have been often ignored.”

Carter said he was surprised and disappointed to see a row of trees cut down along the Monon Trail near Main Street in early January to make way for the upcoming mixed-use development by Ritz Charles owner Chuck Lazzara. Brainard told Current the trees were cut down to make way for a public plaza.

“First of all, that was private property,” Brainard said. “Secondly, the city spends over a  million dollars per year to plant trees. We plant lots of trees. Plus, we’re building on that property.”

City councilor Bruce Kimball, a strident advocate of cycling and trails, said he supports cutting down the trees if it means widening the Monon.

“The Monon is beloved by just about everyone,” he said. “The trail from Main Street South to just north of the fire station will be dramatically widened to accommodate a wide variety of uses. The plan is to gradually replace the scrub trees that have a very short life with longer living native species. The Monon on Main development will include new plazas and green space that will make a terrific setting for concerts like Jazz on the Monon. I have no doubt this new Monon and community space, once finished, will become a community fixture.”

The immediate plan is to create a Monon Boulevard with a wider trail with designated space for both pedestrians and cyclists. There also will likely be one-way roads for motorists on either side of the trail. New trees will be planted.

Carter said the trees that will be replanted won’t be fully mature.

“I understand they will plant trees, but they won’t give us the separation of the urban hustle and bustle for the next 20 years,” he said. “The Monon will be far less comfortable in the name of progress. Much hotter, much less interesting, much less tranquil.”

“We specifically do not want trees cut down along the Monon Trail,” he said. “I’m not happy about it.”

Brainard said everyone on the council knew the trees were going to be cut down. He said in total, Carmel has a good reputation for protecting trees.