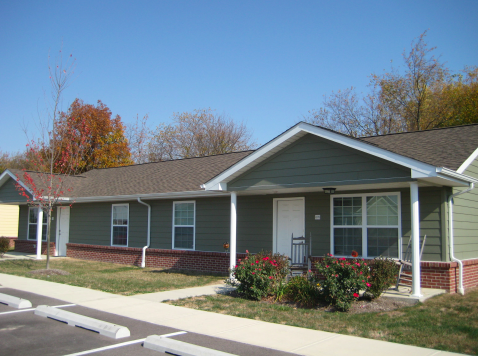 HAND is proposing a $2.1 million project in Home Place that would include duplexes similar to this one it built in Sheridan. (Submitted photo)

Hamilton County Area Neighborhood Development is proposing a $2.1 million project to build affordable housing in Home Place, a 1,017-acre area of unincorporated Clay Township that is surrounded by the City of Carmel.

The Carmel Plan Commission must approve the project for it to go forward. The project has 10 residential units on a 2.4-acre property between 105th and 106th streets, east of McPherson. It includes four duplexes for senior citizens and two single-family homes for victims of domestic violence and other crimes, which will be for the use of Prevail Inc. of Hamilton County. There is no domestic violence shelter in Hamilton County.

Jennifer Miller, executive director of HAND, said the project will have a significant impact on the area.

“HAND has been interested in doing a project in the Carmel and Home Place area for some time,” she said. “There are seniors there, and we’d like to serve them.”

A rain garden is planned for the southwest corner to alleviate stormwater flooding issues, and a small playground and garden area also are planned, according to a fact sheet from HAND. The building materials will be hardy blank and masonry, which are higher-end products not required by the zoning ordinance.

Matt Milam, leader of the group Concerned Citizens for Home Place, said the project is the wrong fit for the area. Neighbors have written that they don’t want more rentals in the area and that they don’t like the designs.

“I am surprised the zoning board would be for the project since Mayor (Jim) Brainard has been trying to Annex Home Place for the last 14 years,” Milam said. “This type of housing is a step in the wrong direction for the Home Place area.”

Miller said meetings are being conducted in the area to listen to neighbors’ concerns.

“We understand their concerns, and we’re doing what we can to address them,” she said. “We do a lot of these projects through a series of grants and some private loans. We feel we do the best we can with the funding we have.”

Combining lots requires a zoning variance because only one principal residential building can be on a lot, and HAND wants to combine lots to simplify ownership obligations. There would be 4.2 residential units per acre, which is less than the current maximum of five units per acre, according to the HAND fact sheet.

HAND will go before the Carmel Board of Zoning Appeals Feb. 27. If it gets the approvals, the next step would be the Carmel Plan Commission. If approved, construction could start in late summer, Miller said.

Bruce Kimball, a member of the Carmel City Council and the Carmel Plan Commission, said he supports the idea of affordable housing, especially for seniors. He said HAND should have met with the City of Carmel before announcing its plans to the media.

“There are some questions about the design standards,” he said. “Currently, he wouldn’t get approved anywhere in Clay Township, but it’s still early in the process, and things can change.”