You are at:Home»Current in Zionsville»Generations work together to run Palomino Ballroom 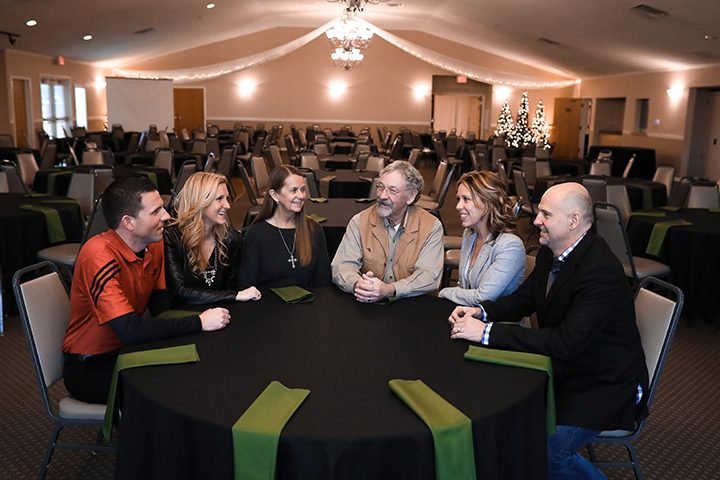 The Palomino Ballroom began 15 years ago. From left, Mark and Jess Strickland, Debbie and Ray Head and Jenny and Chris Burger. (Photo by Feel Good Now)

Throughout their lives, Ray and Debbie Head have been eclectic entrepreneurs. Before finding their passion in the wedding industry, the Heads owned an array of businesses, from a roller skating rink to a deli to a balloon store, among other enterprises. Their businesses have taken them from Indiana to Michigan to California.

The Head’s daughters, Jess Strickland and Jenny Burger, remember what it was like to grow up with parents possessed with an entrepreneurial spirit.

“We were raised in the roller skating rink, where we came of age, and basically we had jobs at (ages) 6 or 7 picking up trash and stuff,” Jess said. “We would get rewarded by getting to play arcade games. That’s where we basically learned the role of self-employment, really, and it’s never stopped. They have owned businesses their entire marriage, so that’s how this all started.”

The couple, which graduated from Pike High School and now lives in Westfield , missed Hoosier hospitality and returned to Indiana. That’s when they found an opportunity in the Palomino Ballroom, 481 S 1200 E, Zionsville, which they purchased 15 years ago.

The family celebrated Ray’s 50th birthday with a party, which is where their friends encouraged them to dive into the party business.

“I think what’s so unique about this story is if you had asked any of us 20 years ago, ‘Do you think you will all end up in the wedding business and all end up on the same property?’ we all would have had a resounding, ‘No way,’” Jess said. “But we are a faith-based family, and it’s been an amazing blessing for all of us.”

“We all live here on this property, too,” Ray said. “Our property runs from County Line Road to Joliet Road. The houses back there we built ourselves.”

Residing in the gray area between two counties also serves its purpose, as the Heads are involved with the Zionsville Lions Club and the Hamilton North, Westfield and Zionsville chambers of commerce. Being on County Line Road, the Palomino Ballroom is on Westfield property but has a Zionsville address because its mailbox is across the street.