You are at:Home»Night & Day»Entertainment News»Real-life couple to play fighting spouses in Civic’s ‘Rumors,’ on stage Feb. 3 to Feb. 18

This Booth Tarkington Civic Theatre’s production is only a partial case of art imitating life. 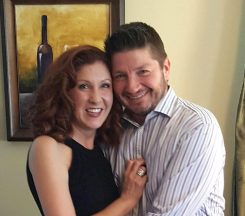 Steve Kruze and his wife Christine will play a married couple, Glenn and Cassie Cooper, in Neil Simon’s “Rumors” from Feb. 3 to Feb. 18 at the Tarkington in Carmel.

Steve joked he is not having the same problem.

“It’s very easy to be mad at her, it’s so easy. I’m teasing,” Steve said. “You have arguments with people you care about. But we don’t snipe at each other like that.”

Christine said the mean comments back and forth can be funny.

“But I’m not used to being mean all the time,” Christine said.

Christine said this is the first opportunity to do a show together since they were in college. In fact, they met during rehearsals for “Twelfth Night” while at Michigan State.

“It’s been 26 years since we’ve been on stage opposite each other,” Steve said.

The couple, married for 22 years, has a Plainfield address but it’s in Avon’s school district.

“As our children were growing up, we didn’t want to do a show at the same time, so we would alternate a little bit (performing),” said Steve, who has one child in college and two others at Avon High School. “Christine got back involved in Civic in 2010 and really enjoyed the experience. When we first moved there from Chicago, I worked with the Civic Theatre and the children’s theatre they used to do, but that was 1993. We took about a 20-year break from doing any kind of performing. It’s such a great place to do shows, between the people and how accepting and supportive that the City of Carmel has been, it just makes it a great experience for everybody involved. Any chance we get we really enjoy performing with Civic.”