You are at:Home»Night & Day»Entertainment News»Indiana Repertory Theatre takes audiences on a trip to ‘The Cay’ in production opening Jan. 28

How does a theatrical team put a wide, fantomless sea on a 20-foot by 30-foot platform? How does it bring a hurricane into a small theater? These were just a few challenges of setting the stage – a single, stationary island – for the Indiana Repertory Theatre’s “The Cay,” on the Upperstage from Jan. 28 through Feb. 26. 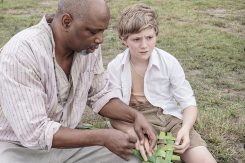 “’The Cay’ does present many unique and exciting design challenges,” Scenic Designer Eric Barker said. “With the story being told from the perspective of a child, one of my main objectives was to allow the audience to take their own personal journey of discovery within the scenic elements, much like a child’s imagination.”

In “The Cay,” a young white boy and an older African-American man find themselves stranded on a Caribbean island. In Gayle Cornelison’s adaptation of Theodore Taylor’s award-winning novel, the play follows a friendship that blossoms despite racial division as Phillip, played by 14-year-old Dalyn Stewart, and Timothy, played by IRT favorite David Alan Anderson, learn that – despite age, upbringing or race – neither will survive without each other.

Taking place on a set that brings to life a variety of circumstances and locations, the characters survive being stranded at sea and tossed amidst a hurricane.

“Just as Philip expands his world view and learns to see Timothy in new ways, we ask the audience to expand its vision and let their imagination bloom,” said director and IRT dramaturg, Richard J. Roberts. “My favorite theater is when you have to use your imagination, and this production encourages just that.”

To help the audience “imagine,” sound effects have been created, using musical instruments, and the props, including two giant palm trees, have been fashioned from items one might find washed ashore after a shipwreck.

“This production asks the audience to look beyond the surface reality of stage objects and imagine a world of natural wonders, just as the characters must look beyond their personal differences and see the possibilities of friendship,” Roberts said.