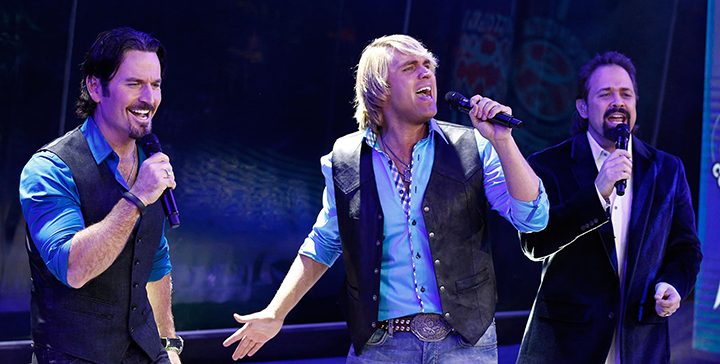 The members of The Texas Tenors had been friends for several years, but formed to compete on “America’s Got Talent” in 2009.

The trio finished fourth in the competition, and since then have performed nearly 1,200 shows in almost every state.

“We’re all tenors, but we’re as diverse as you can get,” J.C. Fisher said. “We all have opposite types of voices. John (Hagen) has a big operative voice. Marcus (Collins) has a more pop and Broadway sound, and I’m more in between.”

“We’re excited to come back and present some new music,” Fisher said. “We have a new ballad called ‘I Don’t Want To Let You Go’ that a lot of the ladies absolutely love. It was written by our guitar player Larry Hanson’s daughter, Jennifer. She also wrote ‘Rise,’ which may be the title track of our next album. It’s an up-tempo, contemporary song.  We’ve only performed these songs a few times.”

Hagen said it will be a special show honoring veterans.

“It’s not all a patriotic show, but there are quite a few numbers that pay tribute to veterans,” Hagen said. “We’ll be doing our signature ‘God Bless the USA,’ along with some other ones. We have a very original arrangement of ‘God Bless America.’ We’ll do a variety of songs from country to classical, so it’s a little bit of everything.”

Fisher said there is a Broadway portion of music, including a section from “Les Miserables.”

“People love that, and it always brings the house down,” Fisher said.

“This will be one of our first times performing the song with a symphony, so that will be exciting,” Fisher said.

There is 50 percent discount for veterans’ concert individual tickets. For more, visit carmelsymphony.org.