You are at:Home»Current in Zionsville»Back in the Day: Early cabinet maker prospers

By the early 1900s, Mills and Cropper was one company that had prospered enough in Zionsville to expand its size and offering. 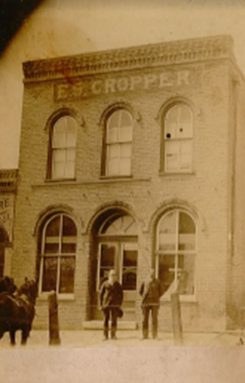 Mills and Cropper was a Zionsville company that prospered and grew during the early 1900s. (Photo courtesy of SullivanMunce Cultural Center)

The business started in 1878 with E.S. Cropper, who was a cabinet and coffin maker at 150-160 S. Main St. When his daughter married John Mills, Cropper brought his new son-in-law into the business. Mills also learned to be an undertaker. They expanded their service into offering dry goods, including ladies apparel.

Mills would even barter farm produce for merchandise, according to Ann Mills Miller in her oral history recorded for the book, “Zionsville The First One Hundred Years.” An interesting side note from her story is that the horse that pulled the company’s hearse also hauled the bass drum for the Zionsville Band concerts.

By 1907, Mills and Cropper saw the need for expansion. The new facility had two floors of furniture on the north side and a store room for dry goods on the south. In mid-1913, the company dissolved with Mills buying out the stock and opening the largest store in the southern part of Boone County.

His new store had not only expanded but featured new technology. An ad appearing July 4, 1913 indicated that “we have installed electric fans for the comfort of our customers.”