You are at:Home»Current in Carmel»Carmel Community»Carmel High School grad crowned Miss Fort Worth 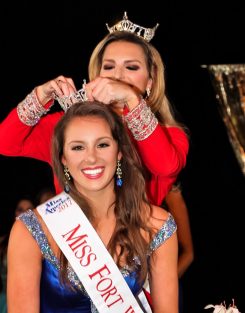 Carmel High School graduate Adaline Bebo was recently crowned Miss Fort Worth and is now preparing to compete in the Miss Texas pageant, June 24 to July 1.

“There was lots of preparation that went into doing the pageant, (such as) interview preparation, paperwork, workouts, personal training, getting outfits together for interview and evening gown,” Bebo said. “To be able to be crowned Miss Fort Worth was one of the most surprising moments of my life, but also one of the most life-changing and exciting.”

Bebo is a sophomore at Baylor University majoring in neuroscience. Her major played a role in her platform for the competition.

“I lost both of my grandparents in the last two years to neurological diseases. During their illnesses, I learned a lot about the nutritional basis of their treatment,” she said. “My platform is called Food For Thought. I’m advocating for better awareness for nutrition and better diet in an effort to improve brain health. I’ve been researching certain foods that promote brain health.”

“Interview is one of the most important sections. Not only is it worth the most, but it’s where you’re able to show exactly who you are and if you’re capable of doing the job of Miss Texas,” Bebo said. “You kind of have to develop your own personal narrative. It’s a compilation of your past, present and future. In order to prepare for interview you have to develop your own ideas on current events and political issues.”

She’s also attending boot camp-style training to prepare for the swimsuit portion of the event. For the talent portion, she plans to demonstrate baton twirling, which she said she has “been training for my whole life.”