You are at:Home»Current in Carmel»Carmel Community»Team Ninja carries their weight as Riley fundraisers 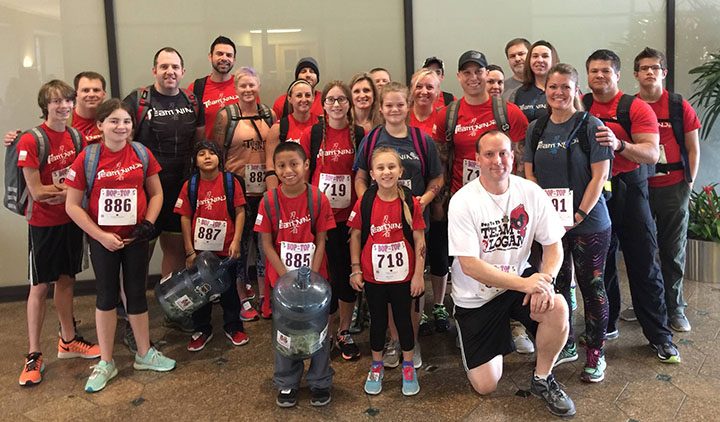 Team Ninja is raising money for Riley through Bop to the Top. (submitted photo)

Several years ago, Bill Vernon was trying to raise money for Bop to the Top, a stair climb event benefiting Riley Hospital for Children at Indiana University Health, when he had an idea.

“If I’m going to ask for money, then I’m going to have to do something extra,” Vernon said. “Then I think I’ve earned it.”

The Carmel resident promised donors he would carry the equivalent of whatever he collected in quarters as he climbed 36-floors of the OneAmerica Center.

“I was not anticipating the response,” he said.

With $50 of quarters weighing roughly five pounds, he began Bop to the Top with 150 pounds of change, splitting the weight with a friend.

“That was the longest, hardest stair climb,” he said. “But we raised a ton of money.”

Vernon raised the money for a team created by friend Mark Simmonds in memory of his son, who had been a Riley patient.

Over the next two years Vernon ran with his own group, Team Ninja, and hopes that they will raise $14,000 when they climb 500 vertical feet Jan. 21. Team Ninja has become one of the top donors to Bop to the Top, and members still carry the weight of all the funds they raise.

Vernon, who was a “Riley kid,” learned the hard way the challenge of carrying and acquiring large amounts of quarters. He and other team members carry the equivalent weight in items like bricks, cinderblocks and sandbags. Last year, 25 people from his group participated in the climb, with everyone carrying various weights.

The name Team Ninja was created by Vernon’s wife when he was trying to think of a name for a group of runners to participate in a single running event. The group wanted to participate in more events together, and the name stuck.

Since its creation five years ago, the group has expanded to nine cities throughout the U.S. to connect people to active events and workouts.

“People were willing to do (events),” he said. “It became our theory that nobody wanted to do these things alone.”

Donations for Riley on behalf of Team Ninja are being accepted at donate.rileykids.org/TeamNinja17.