You are at:Home»Current in Carmel»Carmel Community»Scout builds bench at police station for Eagle project 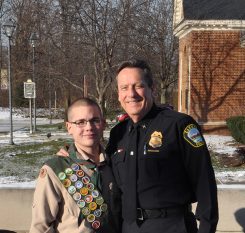 For his Eagle Scout project, Woodcock built a bench at the police station. He also donated his time to complete extra landscaping around the entrance area, including removing a tree stump, shrubs and leveling the ground. Eagle is the top rank a Boy Scout can achieve.

Woodcock said he has worked with CPD on many projects as a Carmel Police Explorer, and he knew the bench would be placed in a useful location for police officers entering and exiting the police station.

“I mainly did my project with the department, because I knew everybody there,” Woodcock said. “It’s just like I was working with close friends.”

In the future, Woodcock plans to join CPD. He said his interest in pursuing a career in law enforcement began after he joined the Carmel Police Teen Academy program.

CPD offers the Police Explorers program in conjunction with the Boy Scouts of America for youth between the ages of 14 and 20. Participants complete an eight-month academy training program and experience various aspects of police work while learning life skills and connecting with members of the CPD. Upon completion of the academy phase of the program, the recruit is given a uniform and is allowed to ride along and observe with a Carmel police officer. The recruits also participate in community events throughout the year, including CarmelFest, CHS football and basketball games and more.

VanNatter said the CPD has four or five police officers on staff who previously participated in the Explorers program.