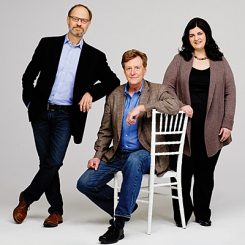 Think of the musical comedy “It Shoulda Been You” like “Will & Grace,” complete with dysfunctional characters tackling controversial situations with crazy antics – but accompanied by music. That’s close to what audiences can expect when Actors Theater of Indiana presents the Indiana premier of the new play, Jan. 27-Feb. 12, at the Studio Theater.

“What the original creative team tried to do was make this a little bit different kind of musical comedy,” said Cynthia Collins, one of the co-founders of ATI. “They made it a little more interesting in that it plays like a TV sitcom. It’s like the audience might think they are in their living rooms watching television.

“It’s fast-moving, 90 minutes non-stop, and it’s happening right there,” she added. “In fact, the original tagline for the play was ‘You’ll laugh. You’ll cry. You’ll be home by 10.’ You won’t be there three hours.”

Featuring music by Barbra Anselmi and a book and lyrics by Brian Hargrove, “It Shoulda Been You” follows a Jewish bride as she readies to marry her Catholic boyfriend. When the bride’s ex-boyfriend shows up, the wedding starts to unravel. Religions collide. Secrets are revealed. Plots are conceived.

But while the dozen characters might seem like comic-types one might find at a sitcom wedding – overbearing Jewish mother, high-strung bride, alcoholic mother of the groom – they not only deal with a chaotic wedding situation, but with the heavier issues of diversity.

“It’s a contemporary spin on the traditional wedding comedy with a message,” Collins said. “It’s about acceptance of others and acceptance of oneself.”

The musical premiered in 2011, and last year ran five months on Broadway, where Collins paid a visit to see her old friend, Anselmi, and view the show firsthand.