You are at:Home»Current in Carmel»Carmel Cover Stories»In the ‘gray zone’: Ukranian volunteer shares stories of life in conflict area, seeks support in Carmel 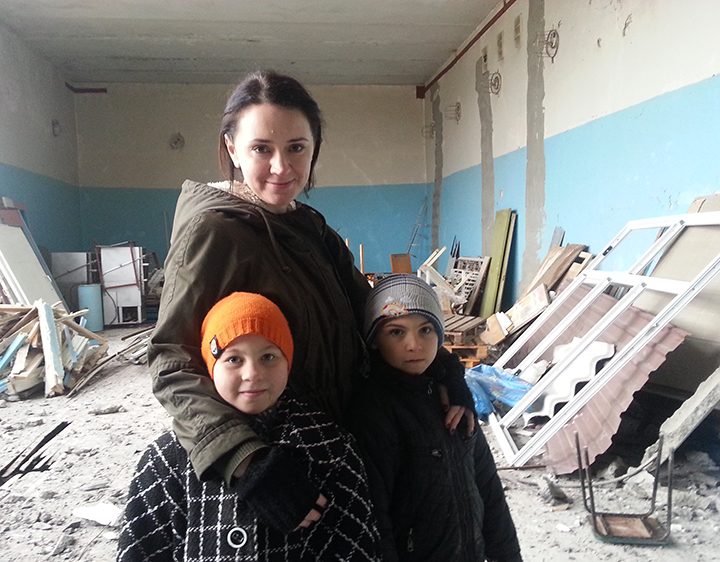 Olena Rozvadovska pauses in a school damaged by shelling with two children who live in the “gray zone” in Ukraine. (Submitted photo)

Olena Rozvadovska is not unique in her calling to work with children. How she’s doing it – well, that’s another story.

The 32-year-old Ukranian willingly left her stable job as a UNICEF consultant and public advocate for children’s rights for the Ukraine President’s Office to reach out to children and families living across the country on the front lines of an unpredictable conflict zone. And, for the most part, she’s doing it all alone as an unaffiliated and unpaid volunteer.

“I’m worried about my future,” Rozvadovska said during a presentation in Carmel Dec. 20. “If we will not save our children now, what future will we have?”

Rozvadovska spoke about the conflict during a special event at Swan Software Solutions, a Carmel-based business owned by Ukraine native Alex Morozov. The IT services company has several offices in Ukraine, including one near the conflict zone.

Attendees included several people who had done mission work in Ukraine, two who are planning to go there with the Peace Corps and others who were born and raised there.

“To go in that area and find people who are actually pro-Ukranian, it’s tremendously dangerous,” said Zhanna Albany, a Carmel resident and doctor originally from Ukraine. “(Rozvadovska) is very modest, and she’s not explaining to the detail how it is, but it’s incredible.” 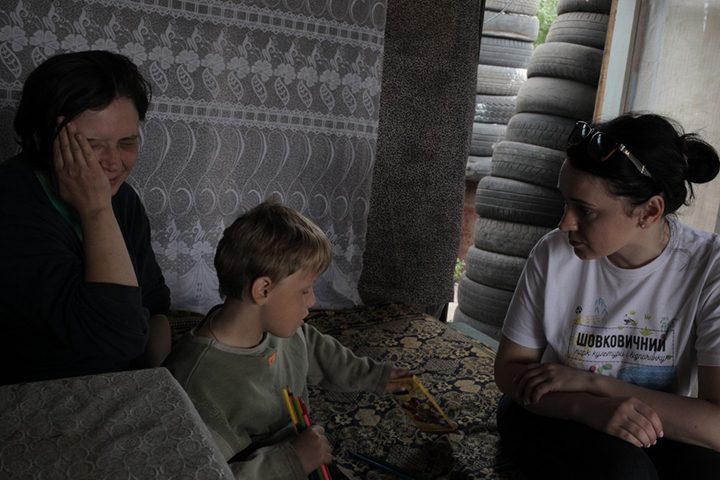 Ukraine has been engaged in a military conflict with pro-Russian separatists in its eastern territory for more than two years. The Office of the United Nations High Commissioner for Human Rights estimates nearly 10,000 related deaths in the conflict area, including dozens of children. Additional deaths are believed to have resulted from secondary causes, including lack of food, water or medicine. Thousands more area residents have suffered injuries.

Rozvadovska’s mission is to reach children living in what she calls the “gray zone,” the territory designated as a buffer between the two sides. She is unaffiliated with any official organization or religious group, although she often partners with them. She grew up in western Ukraine, and her strongest ties to the area are those she’s built on the ground in the last two years.

She works to build trust with children growing up among violence and uncertainty. Many have watched parents or other family members die as a result of the conflict.

Although it may seem like a place families would be eager to flee, she said that’s not always the case.

“It’s really hard to talk to the people, because they (have) already lived in the war conflict almost three years, so (they’re) used to hearing all these shellings overnight,” she said. “It’s like part of their life now.”

The war zone may have become familiar, but it’s not safe. Rozvadovska said part of her mission is to teach young children how to spot and avoid landmines on their way to and from school.

“We conduct this mine risk education even for kids who are 3 years old, and they know all about grenades,” Rozvadovska said. “It’s not news.”

Rozvadovska said overcoming her fear of “being in constant danger” is among the many challenges of her work, and she often struggles to find ways to connect with parents who have “lost the fear of death and refuse to move.” But the great risk is worth it, she said.

“(It’s rewarding) when I have direct contact with children and I know how drastically I have changed their lives, from complete hopelessness and sometimes death to hope and life,” she said.

After returning to eastern Ukraine, Rozvadovska is planning to help launch a counseling center to serve more than 1,000 children per year. She also plans to create her own nonprofit organization and enhance her educational programs for children and their parents as she continues raising awareness in Ukraine and internationally.

Rozvadovska’s visit to Carmel was arranged by Natasha Mazur, the director of generosity at Helmer Scientific in Noblesville. Rozvadovska’s uncle, a business owner and philanthropist in Ukraine, connected the two women, as he had previously worked with Mazur to conduct training in strategic planning and nonprofit fundraising.

Mazur, who also is a native of Ukraine, hopes to use her experience to help Rozvadovska frame a long-term vision and build partnerships with interested stakeholders, including those in Carmel. When she heard that Rozvadovska would be in the U.S. for the Women Leaders: Promoting Peace and Security program, she arranged to have her visit the Indianapolis area to share her story.

“I realized it would be a good opportunity to connect her to the strong and vibrant Ukrainian support network in central Indiana,” Mazur said. “It was imperative for Olena to report, based on her experience, the unreported and often heartbreaking circumstances in the eastern Ukraine ‘gray zone’ to Hoosiers in central Indiana who continue to provide their heart-felt support for Ukraine’s most vulnerable citizens.”

Rozvadovska said she was surprised about the lack of information in the U.S. about the Ukranian conflict, but she found strength in the outpouring of support she received in Carmel.

“I was so impressed to meet very open and kind people, both Ukrainian-American and American, who were genuinely interested but more so wanted to help any way possible,” she said. “I was greatly encouraged and motivated to keep going on and doing what I do just because I received such a huge support from the Carmel group.”

Although the Ukranian battle is halfway around the world, Mazur said there are several ways Carmel residents can help or show support for families living in the “gray zone.”

“The least we can do is share Olena’s story and be ambassadors for the children she serves,” Mazur said. “We can stand behind Olena and empower her by sharing our skills, resources, influence and connections. She is looking for advisors and influencers who will promote and help grow her vision and organization.”

Carmel residents can help by:

Mazur has organized an initiative called Empower Ukraine to provide a transparent and effective way for interested Hoosiers to support children and families in the conflict area. Learn more by contacting Mazur at Natasha@empowerukraine.org.